It is with great pleasure that we can announce next year’s Festival, which will run from 19 May – 27 August 2023

Barrie Kosky’s Dialogues des Carmélites will make its delayed premiere at Glyndebourne in 2023.
Barrie Kosky’s highly anticipated new production of Poulenc’s devastatingly powerful opera Dialogues des Carmélites will premiere next summer at the 2023 Glyndebourne Festival. It was originally scheduled to appear at the event in 2020 before the season was cancelled due to the COVID-19 pandemic. 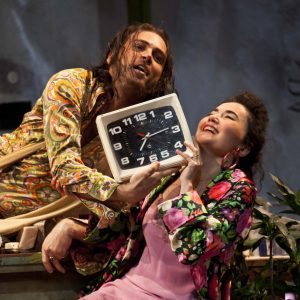 Set against the backdrop of the French Revolution, Dialogues des Carmélites tells a compelling true story of religious martyrdom and follows the struggles of a young woman faced with a harrowing decision. A classic of twentieth-century opera, Poulenc’s achievement is made all the more astonishing by the fact that it was his only full-length opera.

Glyndebourne’s first-ever production of Dialogues des Carmélites will open on 10 June 2023 and is the first new production by Barrie Kosky at the opera house since his landmark production of Handel’s Saul in 2015. Glyndebourne’s Music Director Robin Ticciati conducts the London Philharmonic Orchestra and an exciting ensemble cast led by international soprano Danielle de Niese, making a role debut as the opera’s heroine Blanche de la Force.

Stephen Langridge, Artistic Director of Glyndebourne, said: ‘The cancellation of the 2020 Festival left us with a queue of excellent productions, built and ready to go, but having to wait for their moment. We were determined to get them back in our schedules as soon as possible, so I’m delighted that Poulenc’s Dialogues des Carmélites finally arrives on stage next summer. The combination of Robin Ticciati, who continues his deep exploration of French music, and Barrie Kosky, with his unique theatricality and intelligence, delving together into this powerful, ultimately tragic story, promises an operatic experience not to be missed.’

Opening the 2023 Glyndebourne Festival on 19 May is a new production of Mozart’s Don Giovanni. Working together with conductor Evan Rogister, director Mariame Clément applies her incisive, probing approach and humour to this most complex of works. The production will examine the idea and experience of seduction and the model of masculinity presented by the mythical figure of Don Giovanni.

The works of Mozart have been at the heart of Glyndebourne repertoire since the inception of the Festival and this will be the company’s seventh production of Don Giovanni since its first appearance at the venue in 1936.

Moldovan baritone Andrey Zhilikhovsky stars as the womanising aristocrat Don Giovanni, with the roles of Donna Anna and Donna Elvira, two of the many women to be seduced and abandoned by the dastardly nobleman, performed by Russian soprano Venera Gimadieva and Armenian soprano Ruzan Mantashayan respectively.

The third new production of the 2023 season, opening on 23 July, is Handel’s dramatic oratorio Semele, among the most popular of the composer’s stage-works.

In its first-ever Glyndebourne staging, Semele will be directed by the acclaimed Welsh director Adele Thomas, making her Glyndebourne debut. In recent years, Glyndebourne has forged an impressive reputation for delivering fresh and memorable productions of works by Handel, with successes including Theodora, Rodelinda, Giulio Cesare, Rinaldo and Saul.

All three of the new productions at the 2023 Festival will be filmed for future release on Glyndebourne Encore, a new streaming service that gives on-demand access to Glyndebourne’s back catalogue of world-class opera, as well as all future filmed productions, helping Glyndebourne to share its work with a larger audience.

The 2023 season also sees the return of two of the most iconic and long-running productions in Glyndebourne history. Peter Hall’s magical staging of Britten’s A Midsummer Night’s Dream, a fixture in the Glyndebourne repertoire since its premiere in 1981, will see Finnish conductor Dalia Stasevska make her Glyndebourne debut leading the London Philharmonic Orchestra and a cast that includes Tim Mead (Oberon) and Brandon Cedel (Bottom).

There will be more chances to see L’elisir d’amore next autumn when it will join the Glyndebourne Tour 2023 lineup, alongside Mariame Clément’s new take on Don Giovanni, which is transferring directly from the Festival with a new cast.