John Christie and the Great War

Selected extracts from the letters our founder wrote to his family in the First World War.

1915: John Christie, despite the dual handicaps of being lame in one leg and blind in one eye, managed to enlist in the British Army in September 1914, and was appointed to a commission in the 9th Battalion of the King’s Royal Rifle Corps, 42nd Infantry Brigade, 14th Division, British Expeditionary Force. After months of training at Aldershot and Petworth, the Battalion moved out to France on 20 May 1915. 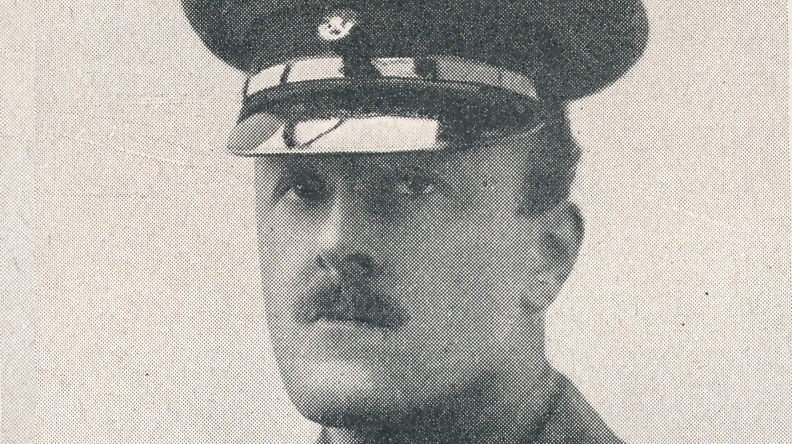 So far everything is pretty comfortable. One night in a rest camp arriving at 4am the rest in the train arriving 6am. 40 men per cattle truck. No room at all, 3 hours in a barn. Very little food. 12 miles march in a hot sun 60 men fell out some unconscious for several hours. Since then billeted here within sound of the guns and in sight of the star shells at night. Last night at 10pm an aeroplane came over and I believe there was an aeroplane fight in the dark. Very hot weather. We feed out on planks and boxes in a hay field. Fortnum and Mason and Tiptree are a great help.

A line to let you know that I have been laid up for a week from poisoned food and am now all right again and rejoining today. In fact in a few minutes time. I have been in hospital in a monastery on the top of the Mont des Cats from which it is said you can see the whole of the line from the coast to La Basseé on a clear day. We have seen the sand dunes anyhow.

Well it’s very dull out here and no one likes it. So it will go on until we get ammunition and guns.

Very many thanks for the Valley of Fear. Novels are very acceptable. I am also having some scientific literature sent out. My mind will go to seed if I don’t do something. There isn’t much scope for an infantryman. So far I have not taken over a fire trench. My turn next time. But I am afraid one’s activities are very limited.

Thought it was awful to begin with, but we had a bad christening. Very hot action. Very lucky to get out of it. Since then it has settled down a lot. Must have been lively when we blew up our mine the night after we left. Hot retaliation by the German artillery.

Can you order some tapioca every week enough for our daily lunch or dinner?

Yesterday I rode into Poperinghe to get my hair cut and a bath. At present no photographs of Ypres taken within the last month or so are on sale in the shops. You can have no idea of the destruction. If you knocked down every house in Barnstaple, you might have some idea of the number of houses and of the enormous devastation produced.

The flies are very bad but Rosalind has sent out some fly papers.

My wounds are the mildest in the world. I never even looked at them for 3 days. Quite painless too. Two tiny little bits of a shell one behind the right ear and the other in front of the right shoulder.

We came out of the trenches yesterday morning… This time we found a camp of green tents pitched with plenty of room. Much more comfortable. I have had a small table made today on which I can write and am having field ovens constructed for the Companies’ Officer’s Mess. We are all getting very fed up with the food… The bleaching powder put into the water makes coffee and tea horrible and often stewed fruit uneatable. There is generally no water… 800 or 1000 men in one farm with one pump

Tomorrow I hope to go off to Boulogne for 2 nights to see Rosalind.

Our trenches were very quiet this last time. Hardly any casualties. I spent about ½ hr a day sniping Germans but without result. We had a very busy time and came out rather tired.

27 September 1915 following the Second Attack on Bellewaarde, to his Aunt Margaret:

Am all right. Had a bad time. Shelled from 3.50 am until 9pm – trench flattened. No one in them, none left. My company lost 65 out of 140. Residue were holding our front line except some 18 with me in support. The little bit of trench we were in was almost the only part not touched. Whole network of trenches destroyed. Repeated showers of earth and columns of white smoke from shells which burst within 5 yds. I read the Faerie Queene to keep the men’s attention fixed on something.

In reserve now near Ypres but move up to the firing line for about 9 days very shortly. Too long. Then back again in reserve for 9 then in rest camp for 9. Heavy shelling of Ypres the night before last but none of our working parties who were going through were hit. Rather lucky. The Germans are using rather heavy guns here but I have had no shells near me and don’t expect to. We had a few fairly near in Poperinghe as I was coming out after a very bad dinner there last night but they are generally aimed at the square and we skirted it. I suppose their gun is about 7 or 9 miles off.

We expect to winter here. Any pheasants you can send will be very welcome. They take about 4 days en route from Devonshire.

We have a table and three broken chairs in the room. Nothing else and about 2 panes of glass in the windows.

Very quiet night so far. Our trenches are pretty quiet I think, 200 yds to the right of where we were in our recent attack. Much work has been done on them since then but the ground is very poor, many hundreds of bodies in this particular sector half, wholly or unburied. June 16th and July 30th fighting over this ground, as well as much of the other fighting earlier in the year.

Yesterday I rode off with 25 of our men to the review of about 6000 men by the King. Bad weather and not very exciting. I had to go as it seems I have been recommended for something. Don’t know what. I didn’t ask. Glad if anyone thinks I have not done badly but I disapprove of honours and told our Colonel so weeks ago. I don’t know what he means. I don’t see what he can mean. Can you be recommended for nothing? I haven’t done anything.

I hope to be back for leave towards the end of next month. We return to the trenches in a week or so to a quieter sector. About time! Few divisions have been so cut up as ours. Living in Belgium into the bargain.

Following the action at Bellewaarde, John had spotted his name on a list of those recommended for a Distinguished Service Order – he immediately crossed himself off the list, but was later unable to avoid being awarded the Military Cross.

A short line to say that we are all well. I think we are in the trenches now for about 2 months. I write this from a reserve dug out constructed on the French system like the tube:- ribbed iron. Quite comfortable. In the firing line we are very badly off. Just a shorty about 4ft. high. However we are now constructing better ones. It has been rather cold. The ice on the water in parts of the trenches has been strong enough to bear. My boots – spare pair I take up – were frozen in my dug out one morning and had to be thawed before I could get them on.

This life is very dull. Lots of shelling going on now.

I do not think I shall be able to get back for leave for some weeks.

Please do not pay Fortnum and Mason’s bill as I am disputing it.

About 6pm now. Shelling all over. Has been quite strenuous. One or two in the water near us. Dining shortly. Fried pheasant. bread and honey.

John returned home for a week’s leave at the end of December 1915 and returned to the trenches in January 1916. However, he was recalled for a further medical, and this time he was unable to conceal his blindness and was invalided out, much to his disgust.