Summer 2020 in the great outdoors

Uncover the trials and tribulations that went into staging a summer season at Glyndebourne in the time of COVID-19.

This summer our teams pulled out all the stops to make outdoor performances at Glyndebourne a reality, pandemic or no pandemic.

With Festival 2020 cancelled, everyone at Glyndebourne was desperate for performances to resume as soon as possible, in whatever shape COVID-19 regulations would allow. When outdoor performances became a reality, our creative team spun into action, quickly devising a series of concerts from our orchestra players, and working out how we could create an opera within the guidelines. 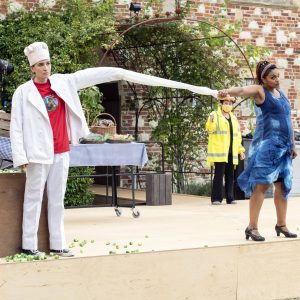 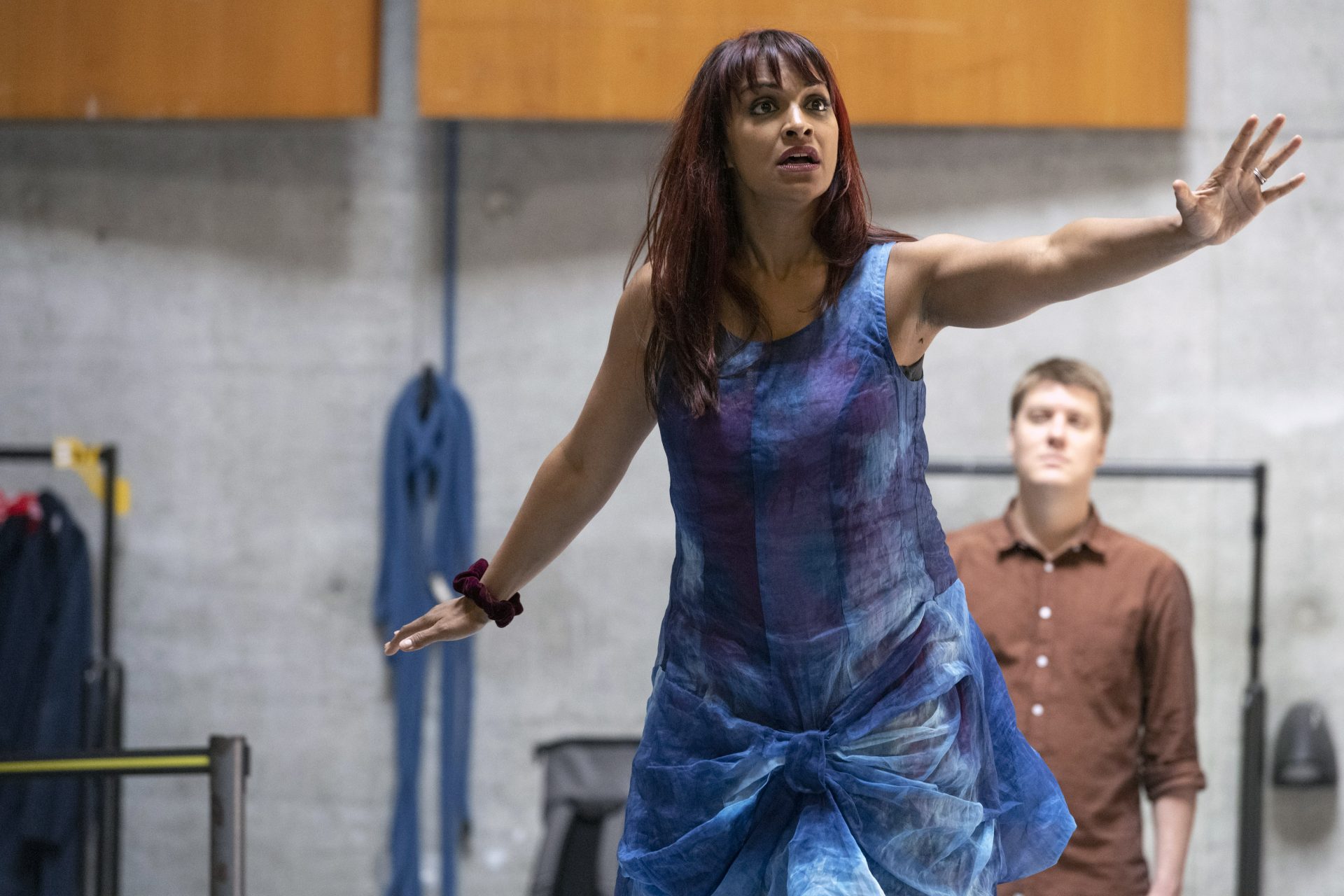 With just six weeks to go until the proposed premiere, Artistic Director Stephen Langridge set to work finding the right piece. ‘I wanted something short and funny to contrast with the serenity of the LPO concert’ Stephen said, ‘I was looking for pieces that gave a good chance for a belly laugh, with only a few people in them, that would be fun, and had a broad enough comic style to work as an outdoor performance. [Librettist] Stephen Plaice and I set to work trying to find a piece that would work, and narrowed it down really quickly.’

The piece they settled on was Offenbach’s Mesdames de la Halle, which Plaice reworked into a new translation entitled In the Market for Love. In parallel, the Glyndebourne machine set to work on doing everything else to bring it to the stage, work that would usually start months, sometimes years, before a production premieres.

With a cast in place, and Stephen directing, rehearsals commenced. ‘Rehearsals were weird in many ways’ recalls Stephen, ‘not being able to touch anything was odd, as was the feeling of just being back at work after so long, back in the rehearsal room but with a new set of rules’.

Despite the seriousness of the situation, and the stringent rules on distancing, that didn’t mean that there wasn’t fun to be had in the rehearsal room. ‘We didn’t want anyone to get sick, and we wanted to take the rules seriously, but in a fun way’ Stephen notes. Soprano Danielle de Niese, who played Ciboulette, remembers one such occasion, ‘Stage Manager, Stephen Cowin, pulled out an enormously long cane that looked a mile high but it turned out to measure exactly three metres! We were frozen like children playing musical statues at a birthday party while Stephen patrolled the room measuring and making sure we were properly distanced… Stephen Langridge mischievously smiling to himself… the rest of the room in fits of laughter!’ 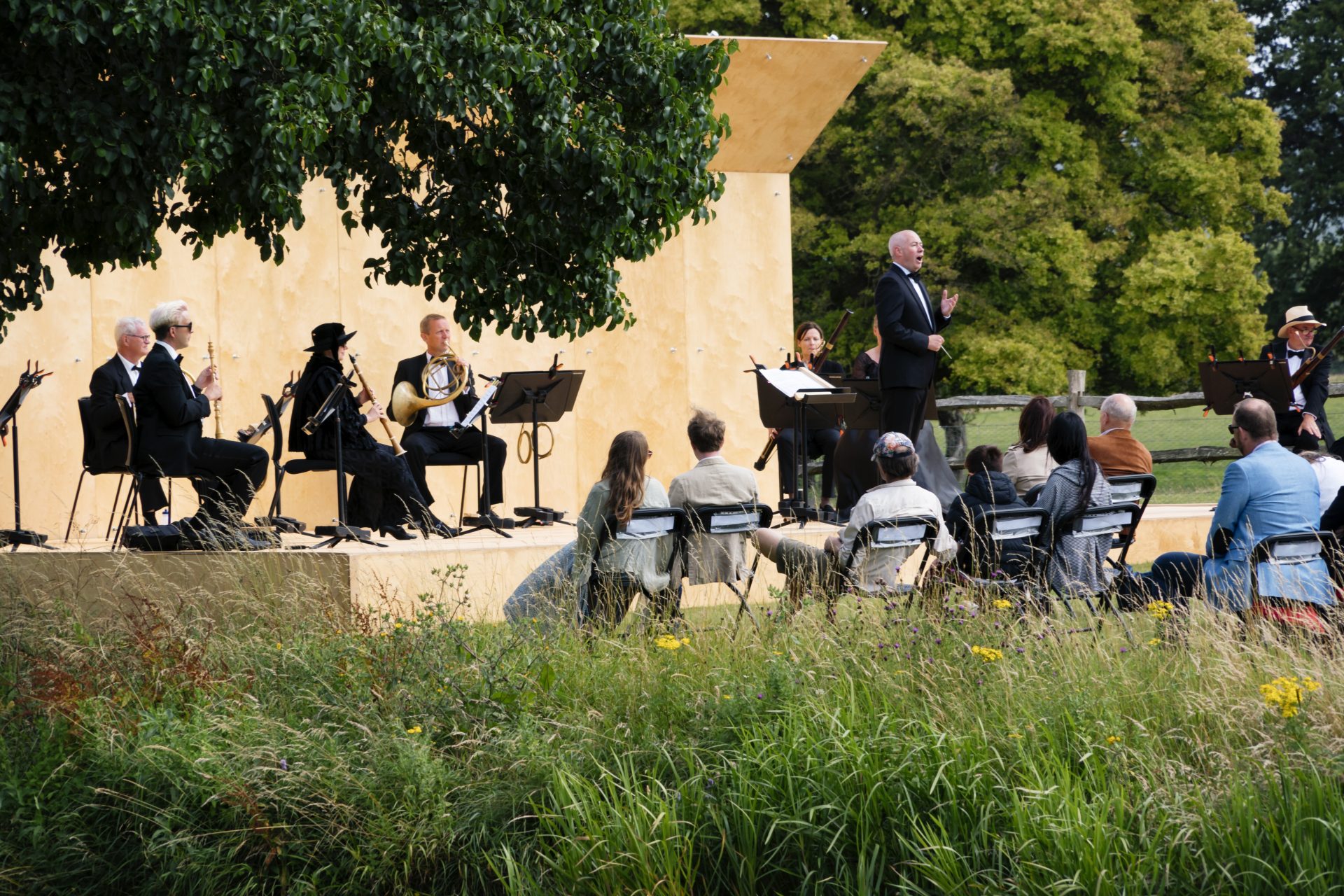 While In the Market for Love was in the rehearsal room, the first of our outdoor musical events was taking place outside – the charming concert series from the Orchestra of the Age of Enlightenment (OAE), conducted by Aidan Oliver. ‘Performing in the outdoors was a great joy, but not without its occasional challenges’ he told us. ‘There was an ongoing battle of wits between the players and the stiff breeze that tried to whip the music off their stands, and during one performance the OAE’s second oboe performed a diving save worthy of Ben Stokes to stop his part ending up in the lake!’

There were other rather more unexpected interventions from the natural world to be faced, ‘A plague of flying ants during one concert, and on one memorable occasion a particularly poignant silence in Jonathan Dove’s ‘Figures in the Garden’ was interrupted by a less-than-poignant bellow from an unimpressed cow nearby’ laughs Aidan. Despite these uninvited guests, the concerts were a great success, returning for a second run in September.

With the first run of OAE concerts over, it was time for In the Market for Love to hit the stage – a nerve-wracking time for cast and creative team alike, as Stephen tells us – ‘I was guessing what it would be like outside and how we would get it to play for the public – audibility, visibility and communicability were vital and I worried it wouldn’t work.’ Danielle shared this apprehension, ‘Singing outside is wildly different to the comfort of the auditorium. There is no shell for the sound to reflect and reverberate on and I was afraid that the wind was going to carry our melodies and words away’. 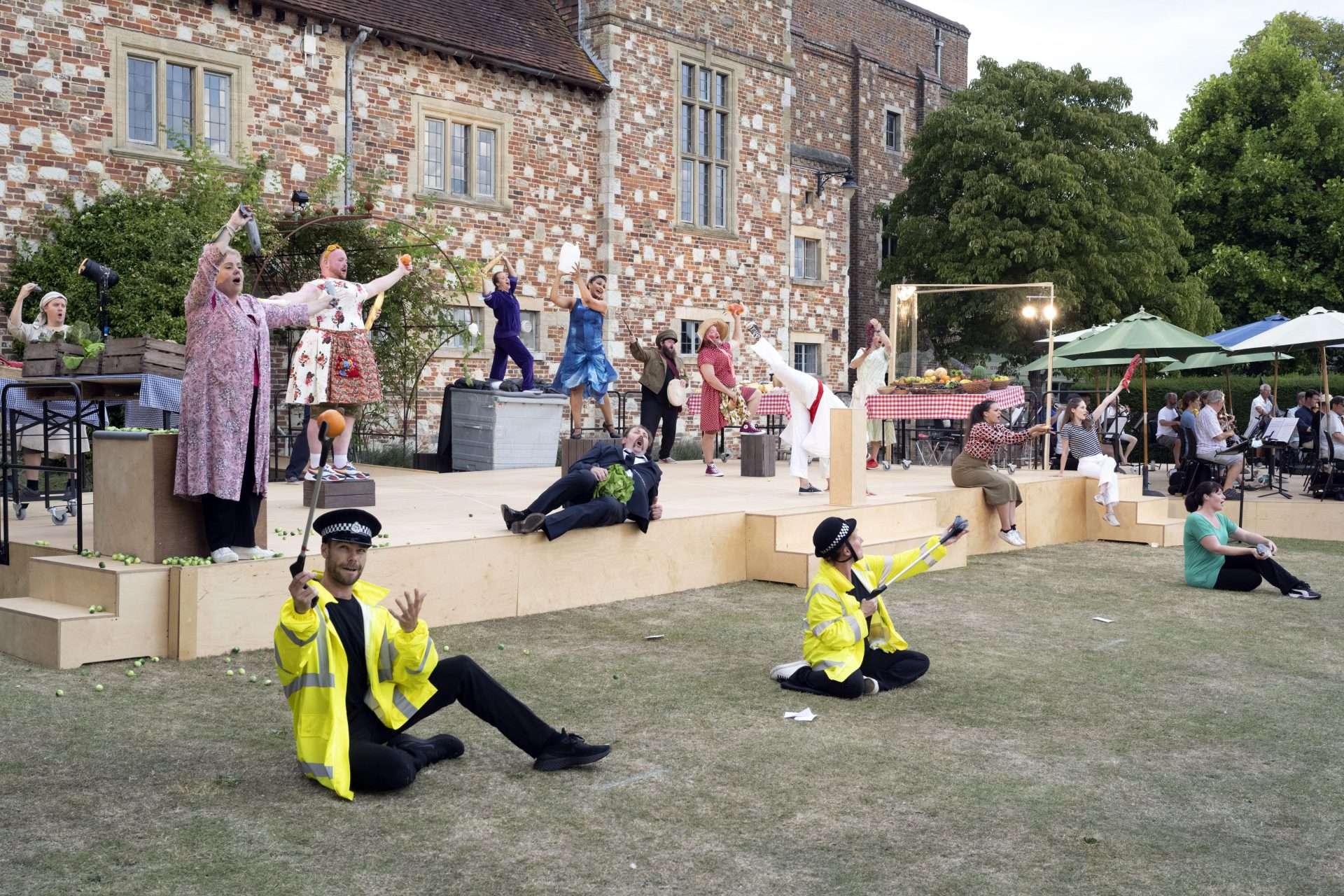 These fears were thankfully misplaced – due to the careful planning of the staging and the benefit of the natural acoustic of the Old Green Room wall, the outdoor performances were a success. ‘It worked really well’ says Stephen, ‘the cast and orchestra took it on and owned it’. It soon became clear that this comic opera was a hit with the audience. Danielle remembers ‘The biggest “tell” was seeing (rather than hearing) the audience laugh. The sound of their laugher was often diffused by the outdoors but the shaking bodies and shoulders and wide grins: that’s something I’ll never forget.’

Each joyful performance of In the Market for Love was preceded by ‘Reverberations in Nature’, a garden concert from the London Philharmonic Orchestra. Conducted by Robin Ticciati, it featured work by Gabrieli, Wagner, Ives, Mahler and Takemitsu.

The outdoor performances posed as many new challenges for our front of house team as those faced by the production teams. The most unpredictable of these was the wind. Not only were there problems of spilled drinks and runaway tablecloths, one particularly stormy day (thankfully a non-performance day) saw a table blown into the lake and the destruction of the mini-marquee used by performers behind the stage. We saw a great team effort to overcome these setbacks, with things like the gardener’s leaf blower requisitioned to dry out the audience’s seats after a rainy night!

The front of house team also turned their hand to animal rescue when a buzzard stunned itself by flying into one of the greenhouses. The dazed bird was rescued and placed in a picnic hamper in one of the dressing rooms, while East Sussex Wildlife Rescue was called to collect it.

All in all, the summer was a huge success, testament to the amazing dedication of Glyndebourne staff. 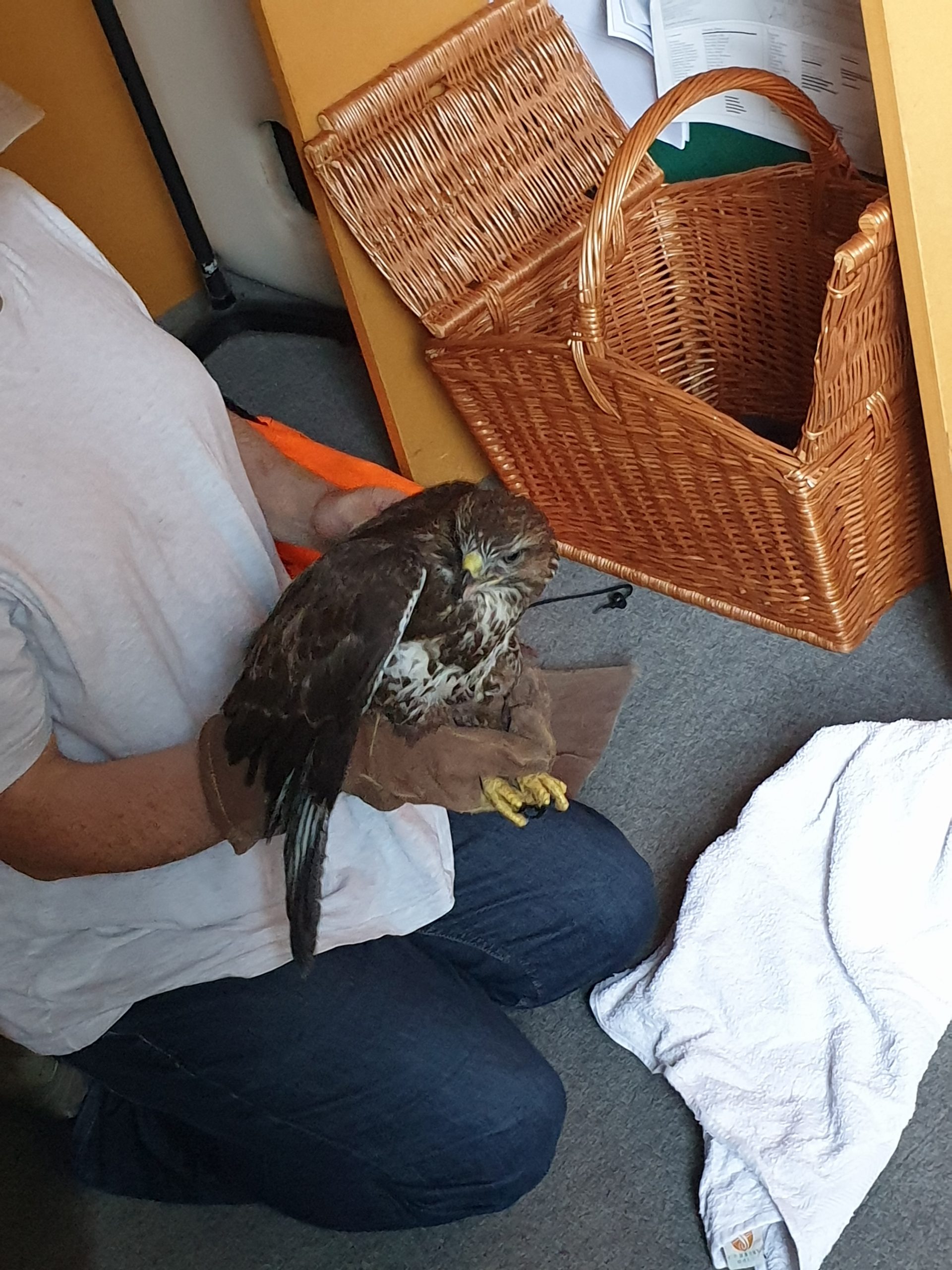 This Christmas you can watch a special 50-minute documentary, telling the inside story of our battle to get back to live performance after UK theatres were forced to close, due to the COVID-19 pandemic.