Darren Elder: How I spend the interval

Our Head Flyman Darren Elder talks to Tanya Richardson about his unique job with a birds-eye view of every opera.

Darren Elder has worked at Glyndebourne for 21 years – 17 of these have been as Head Flyman.

He can often be found high above the stage on the fly floor or working in the flytower – home to scenery that is ‘flown’ down to the stage when it’s needed for a scene change.

Darren spoke to our Development Manager, Tanya Richardson, about his unique job with a birds-eye view of every opera. 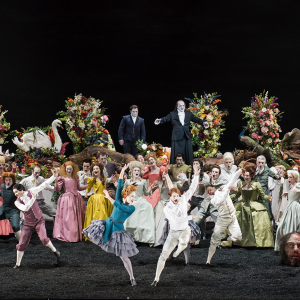 Donate to the Annual Fund

As Head Flyman it is my job to ensure that all the scenic flown elements of each opera are in the correct place and able to ‘fly in’ without clashing or impeding any other elements. I spend a great deal of time planning and setting up the flytower with my team to ensure we can deliver the flown pieces where and when they are required in the opera. With a team working overnight to shuffle the flown pieces around for the morning rehearsal, and my day team reshuffling the flown pieces back for an evening performance, the logistics and weight that is moved soon mount up.

We take a great deal of pride in making sure our ‘flying cues’ are as in time with the music as we possibly can. This is more noticeable to the audience with the final curtain landing on the stage on the final note. 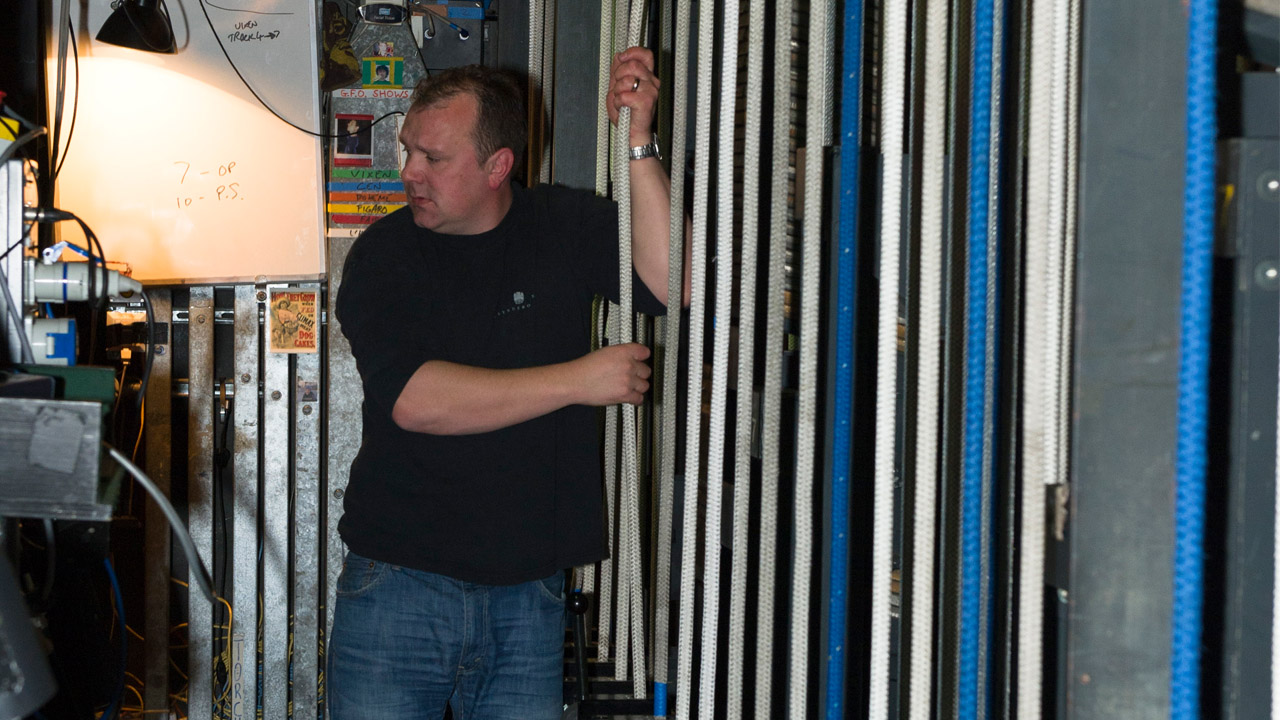 Before each show, and during the interval we use our ‘Bible’ a checksheet containing all the flown elements for the opera and what counterweight set they are flown on. Each opera can have multiple flown elements that need to be pre-set in different positions, or heights, for different acts and scenes. Each production is allocated a colour at the start of the season and we use that specific coloured tape on the rope for each show element to ensure they are in the correct position. The interval change could be a ten-minute reset, or it could be an hour and a half of striking scenery and placing new scenery in its place.

I fly and direct the operation of the flying system with three highly experienced flymen in addition to other staff that are recruited on a show-by-show basis from the stage staff. With a team of four on the night shift, we operate and maintain the flying system on a 24/7 basis throughout the Festival.

When our new stage automation system is in place [a five-year backstage modernisation project, beginning in late 2019] the physical side of the job will certainly change drastically, and the mind set for the operation of the system will be different. The automation system will boost our ability to find creative flying solutions, and enhance the operation and delivery of each opera we create in the future.

Increasingly, visiting opera directors are asking for fly cues to be faster and faster. An automated fly-system not only provides increased speed to cues and scene changes, but allows us to produce advanced effects for the audience, such as the seemingly weightless flight of the mermaids in Rusalka, known as personnel flying. It will considerably expand what we can do, enabling us to lift heavier scenery, perform more complex and synchronised movements in the air, and crucially reduce the impact on flymen’s bodies.

Glyndebourne’s Annual Fund will help raise funds to support its new stage automation project. Your donations to the Annual Fund, large or small, are invaluable in maintaining our standards of excellence.