Five years ago Glyndebourne became the first UK arts organisation to generate its own power, through its on-site wind turbine.

Five years ago Glyndebourne became the first UK arts organisation to generate its own power, through its on-site wind turbine.

Situated a short distance from the opera house, the 67metre Enercon wind turbine was launched in January 2012 by Sir David Attenborough.

Since then energy-saving efforts combined with high average wind speeds have seen the initiative exceed targets. 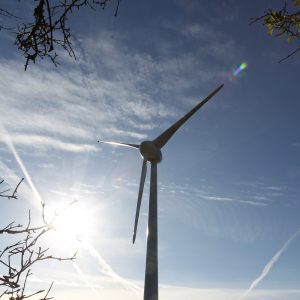 Figures just released show that on average across the five years since it was launched, the turbine has generated the equivalent of 102% of Glyndebourne’s annual electricity requirements, outperforming its annual target of 90%.

In 2016 the turbine produced an annual yield of 1,408 megawatt-hours (MWh) with an average annual wind speed of 6 metres per second. This was equivalent to 99% of Glyndebourne’s electricity requirements for the year.

Energy-saving changes introduced to maximise the impact of the turbine include:

Gus Christie, Executive Chairman of Glyndebourne said: ‘Five years on from launch, we are delighted by the success of the wind turbine. It has outperformed our expectations and played a big part in galvanising our drive towards greater sustainability. In addition to cutting down our electricity use, we’ve addressed all the other elements of our environmental footprint including waste, water and travel. There’s still work to do but I’m immensely proud of what’s been achieved and look forward to seeing further improvements in the coming years.’

Efforts to address Glyndebourne’s environmental footprint are driven by a group of staff volunteers. Future plans include:

Since 2013 Glyndebourne has been accredited with a 3* Industry Green rating by independent environmental organisation Julie’s Bicycle, the highest possible rating for environmental performance, currently held by just fourteen arts venues and outdoor festivals.

Everything you need to know for your visit to Glyndebourne.
Glyndebourne Shop
Our online shop offers a great selection of exclusive and locally sourced products. Every purchase supports our work.
Shop now
Become a Member
Enjoy priority booking for the Festival. Find out how you can join as an Associate Member
Join today
Support us
Glyndebourne is a charity and the Festival receives no public subsidy. We rely on generous supporters who are passionate about opera.
Find out more