An exhibition of visual art inspired by The Rake's Progress including work by David Hockney and Tom Hammick.

The Rake Progressed
This exhibition is Glyndebourne’s first to bring contemporary art and the permanent collections together in one space. It explores how visual artists have engaged with and celebrated William Hogarth’s engraving cycle, A Rake’s Progress, first published in 1735, and Igor Stravinsky’s, The Rake’s Progress, which had its world premiere in 1951 at the Teatro La Fenice, Venice.

The post-war period at Glyndebourne saw an influx of modernist designers and composers under the visionary leadership of the then general manager, Moran Caplat. Caplat, together with producer John Cox, approached David Hockney to design a new production of The Rake’s Progress for the 1975 Festival.

Hockney was already familiar with the opera’s narrative and Hogarth’s prints, having made a series of his own etchings between 1961-63. Hockney’s designs for the production included stage sets, costumes, posters and the front cover of the Programme Book. Testament to their friendship, Hockney also completed a portrait of Caplat as a retirement gift. This is the first time the simple line drawing has been publicly exhibited. 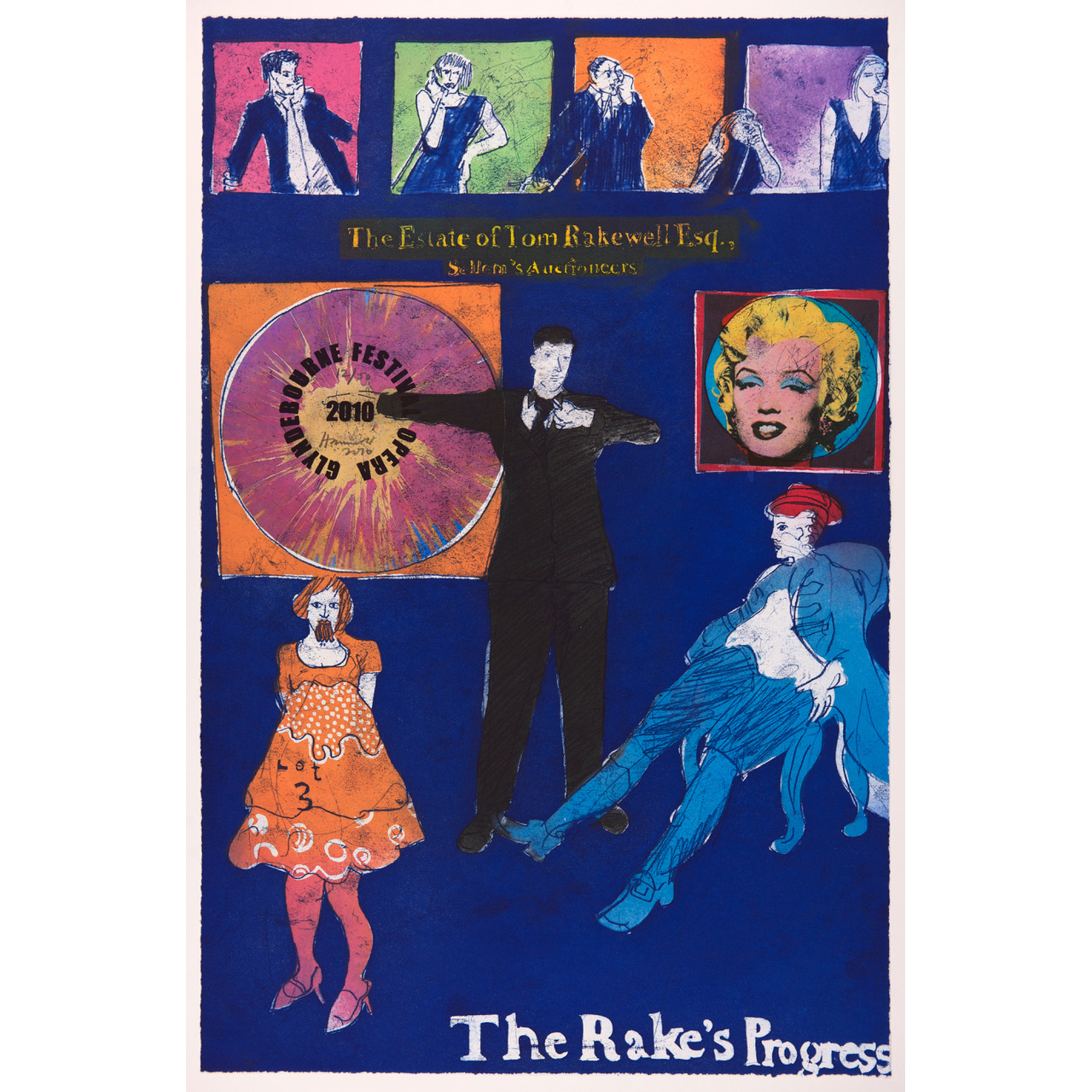 Hockney’s new designs were radical for Glyndebourne. Using a distinctive monochrome palette, he used cross-hatching and parallel lines drawn from Hogarth’s series to create a living etching on an exaggerated scale. Hockney described the process later, ‘We made a lot of samples of the cross-hatching in different sizes and hung them up on the stage. I sat at the back of the theatre with binoculars, deciding what the scale should be. If it was done too small, it would look like a checkerboard – and that would be ridiculous. So I made some calculations and came up with the exact size’.

This year, Glyndebourne commissioned British painter-printmaker Tom Hammick to respond to the visual and musical history of The Rake’s Progress. Hammick first responded to the opera for the 2010 revival, creating a Festival poster with a contemporary reimagining of Baba the Turk and Tom Rakewell. As Associate Artist for 2021-2022, Hammick has also made woodcuts and etchings inspired by the other Tour productions.

Exploring common themes in both Hogarth and Hockney’s works, Hammick writes, ‘In my images I have responded to Stravinsky’s Rake in the footsteps of Hockney’s iconic interpretation from the 1970’s, stealing here however, from Hogarth’s A Rake’s Progress, Gin Alley, A Harlot’s Progress and Marriage à la Mode. These are extraordinary prints that I have been drawn back to over the years, which we cherry picked in the studio to create tapestry-like detail within a large woodcut. It shows Anne Trulove, her dress ‘stitched’ with figures, pulled from Hogarth’s original etchings and engravings. Within the same woodcut, Tom Rakewell and Nick Shadow are fused, since the latter becomes so controlling of his impressionable anti-hero. It’s as if this demonic character has his own invisibility cloak which shields his malignancy from Anne Trulove’s devotion. It was at first a challenge to respond in a new way, but I hope that my own voice has emerged. I’ve loved the opportunity to follow in the footsteps of two great artists from two different centuries.’

The exhibition is open to all ticket holders for Tour performances at Glyndebourne this autumn. You can find it in Gallery 94, our exhibition space by the stalls entrance to the auditorium.

If you would like to enquire about purchasing one of the priced works, or for further information about the exhibition please contact Nerissa Taysom – nerissa.taysom@glyndebourne.com.