Fifteen years ago, Alex was elected leader by the people.

Wanting control and power over the resources of Orientis, he proposed a new law, a division into two. It was agreed and voted in by his counsel. As a result, all those not born in Orientis were sent to live in Aquila. This included Maya, his own mother.

The action begins when the leader of Aquila’s peace movement is killed on the shores of Orientis.

A song sounds, caught by Alex’s daughter Elin in a dream. It is the song her grandmother used to sing. She questions her father, Alex, but he is dismissive, telling her to forget the song and her dream. The people are gathering, waiting for their arrival. 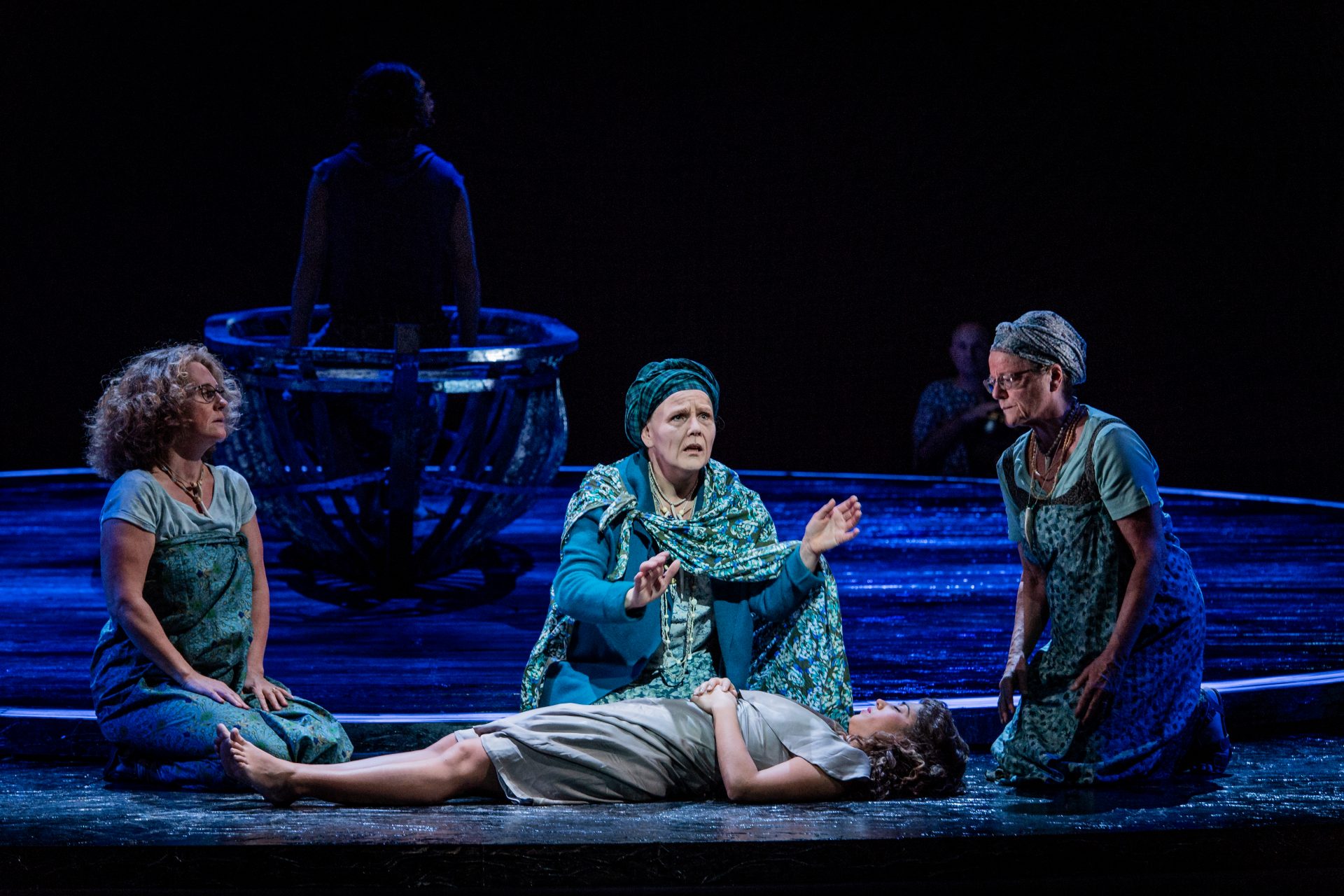 The people of Orientis gather uneasily. No one knows who to trust. Rumours fly around about a death the night before. Aquila’s ambassadors arrive to demand a replacement from Orientis, a token of safety between the islands. Elin volunteers and is stopped immediately by Alex who is terrified of losing her.

Maya has arrived back for the first time with the people from Aquila, adding to Alex’s panic. Deeply shaken, he hurries the ambassadors and his attendants off to discuss a new agreement.

The people wait for the outcome. Someone spots Maya and recognises her. A group of gossips share memories of her before she left. Maya expresses how she was sent away to live in Aquila. Deeply hurt, angry and not wanting Elin to grow up in the middle of this conflict, she never returned. 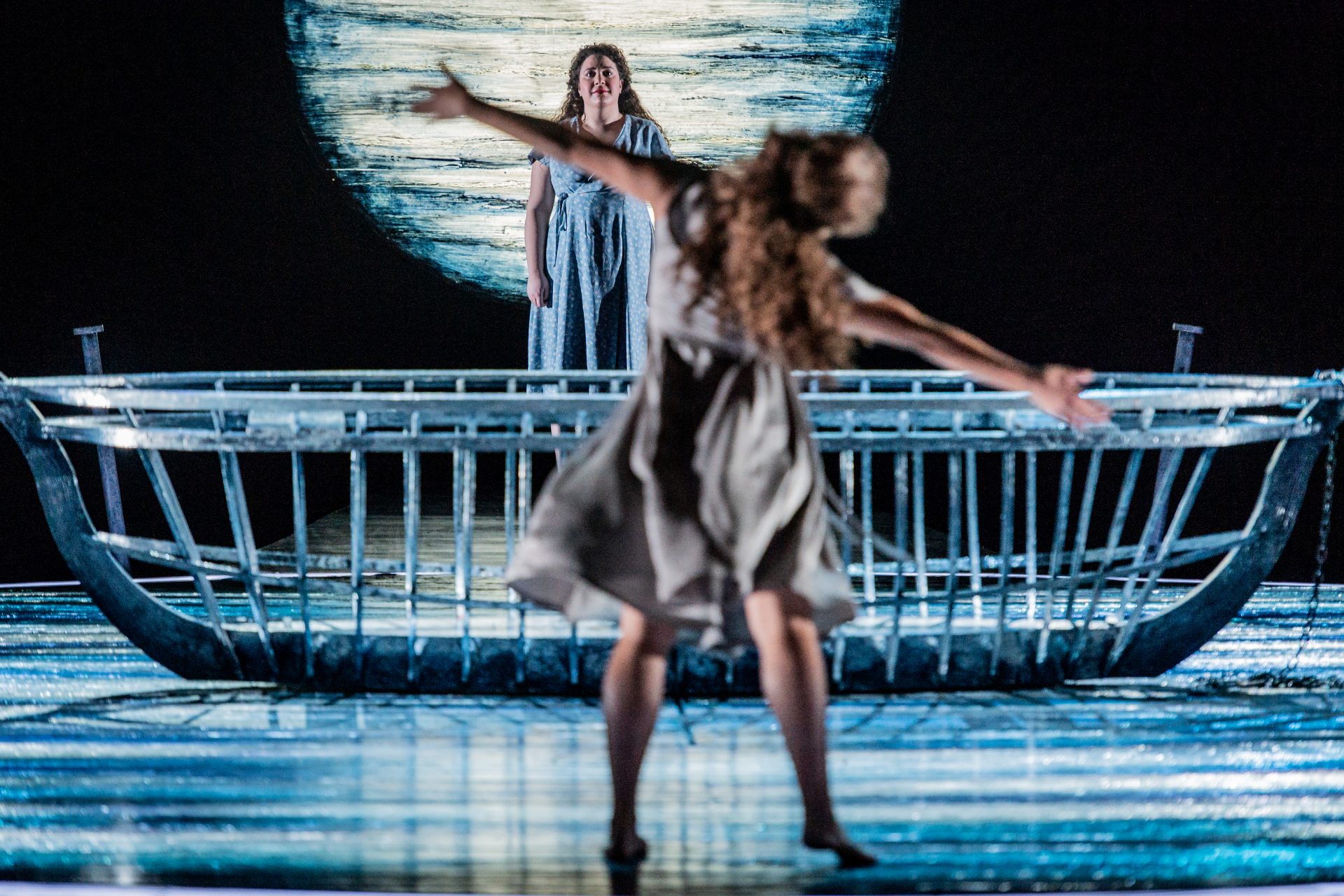 Elin meets Korimako from Aquila and they fall in love.

Alex declares that a new agreement has been proposed. A boundary is drawn through the water that no one is allowed to cross. Where before they had been allowed to move freely between the two places, they are now completely cut off forever. The agreement is signed by the leading representative of Aquila’s ambassadors.

As Aquila depart, a small group spot Korimako standing with Elin. They tell him to leave quickly and follow them back to Aquila. Korimako tells Elin to listen for the sound of his flute each night across the water.

Once they have gone, Elin learns that her grandmother was there but has now left in the boats back to Aquila. The new agreement means she must lose hope of ever seeing her again.

Heartbroken at having lost both Korimako and her grandmother, she longs to escape. One night, she wades out into the water and begins to swim, following Korimako’s song. They meet at the divide and spend the night together in his boat, parting at morning before they can be caught.

The second time they try to meet, attendants at the border spot Korimako’s boat and arrest him. Korimako tells them that Elin is in the water, begging them to rescue her. They refuse to listen or believe him, taking him to Orientis to be punished by Alex. Lost in the water, Elin dies.

From what follows, unrest spirals and the tears of the people form rivers to the sea, breaking up the land. The conscience of the people and their leader is forced to the surface. Pushed to accountability, the song must sound again.

Find out more about Agreed, an opera by Howard Moody

Find out more about every opera that has been performed at G…
Glyndebourne Shop
A beautiful array of gifts for her, for him, for children and for the house and garden. Every purchase supports our work.
Shop now
Opera Cup
Join us in discovering the opera stars of tomorrow
Find out more
Become a Member
Enjoy priority booking for the Festival. Find out how you can join as an Associate Member
Join today