Vanessa: an opera ahead of its time

We take a look back at the very first production of Samuel Barber's Vanessa, with some fascinating photos from the Met Opera archives.

When Samuel Barber’s opera Vanessa was premiered at New York’s Metropolitan Opera on 15 January 1958 the reaction was unanimous. Hailed by critics as, ‘The best US opera yet staged at the Met’, ‘A major contribution to the international repertory’, ‘A near-masterpiece’ and even, ‘The finest and most truly ‘operatic’ opera ever written by an American…one of the most impressive things to appear anywhere since Richard Strauss’s more vigorous days’, the work was an immediate hit. Later that year it was awarded the Pulitzer Prize.

The 60th anniversary of the opera’s premiere, celebrated this month, offers an opportunity to look back at Vanessa’s history, to ask why this extraordinary work – the long awaited Great American Opera – fell out of the operatic repertoire, and to explore why it’s only now, years later, that it is once again being embraced internationally as the quiet masterpiece that it is. 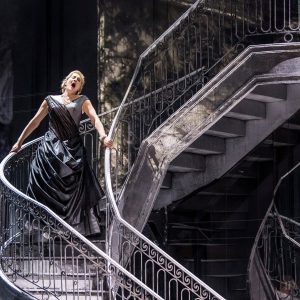 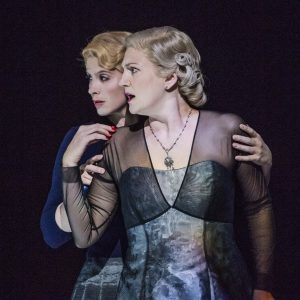 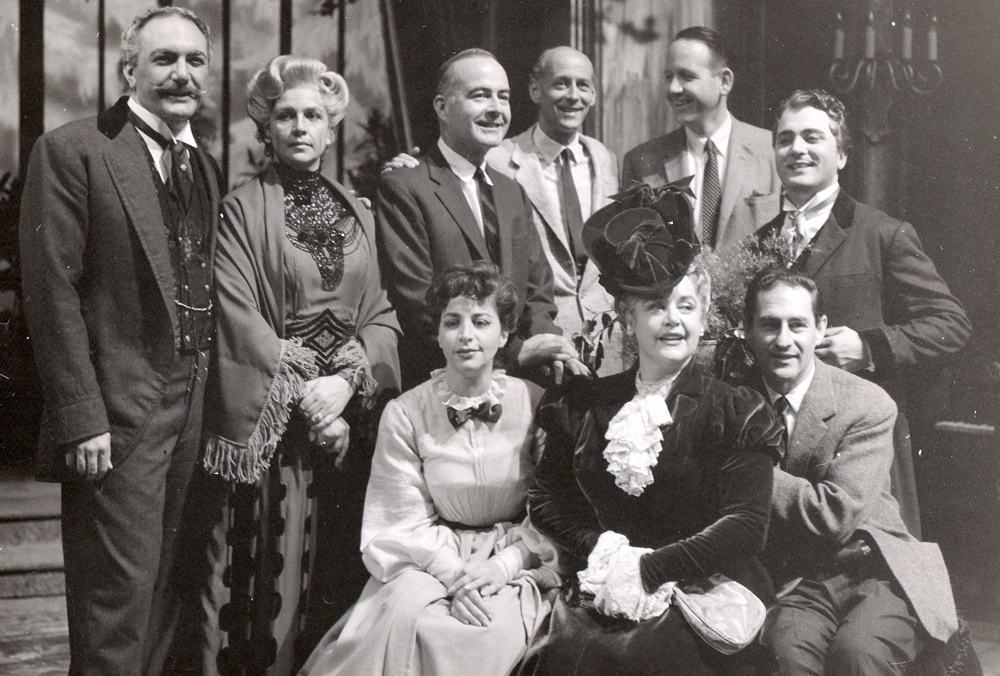 Vanessa may have been premiered in 1958, but the work’s gestation actually began several decades earlier. As early as 1934 the young Barber, already making a name for himself as a concert-hall composer, wrote in a letter that he was ‘anxious to attempt’ an opera. But circumstances intervened; the war derailed some plans, and other commissions proved uninspiring to the composer, but the chief problem was the embattled question of a libretto.

‘Most librettos are entirely too wordy,’ Barber lamented. ‘Writers must get the feel of the lyric stage – the real smell of the stage.’ The composer’s search for an appropriate text sent him to some of the great writers of the age. Conversations with Thornton Wilder and Stephen Spender both came to nothing, while a plan to adapt Tennessee Williams’ A Streetcar Named Desire ultimately proved fruitless. It was only in 1952 that a solution finally presented itself, when Barber’s long-time friend, lover and fellow composer Gian Carlo Menotti offered to write a suitable text.

But Menotti, a successful opera composer in his own right, had never before written a libretto for another composer to set, and the plan was approached cautiously by both parties. ‘We had the usual suspicions that very good friends have about each other,’ Barber later recalled. ‘I wondered if he would really do it. He wondered if I really could do it.’ 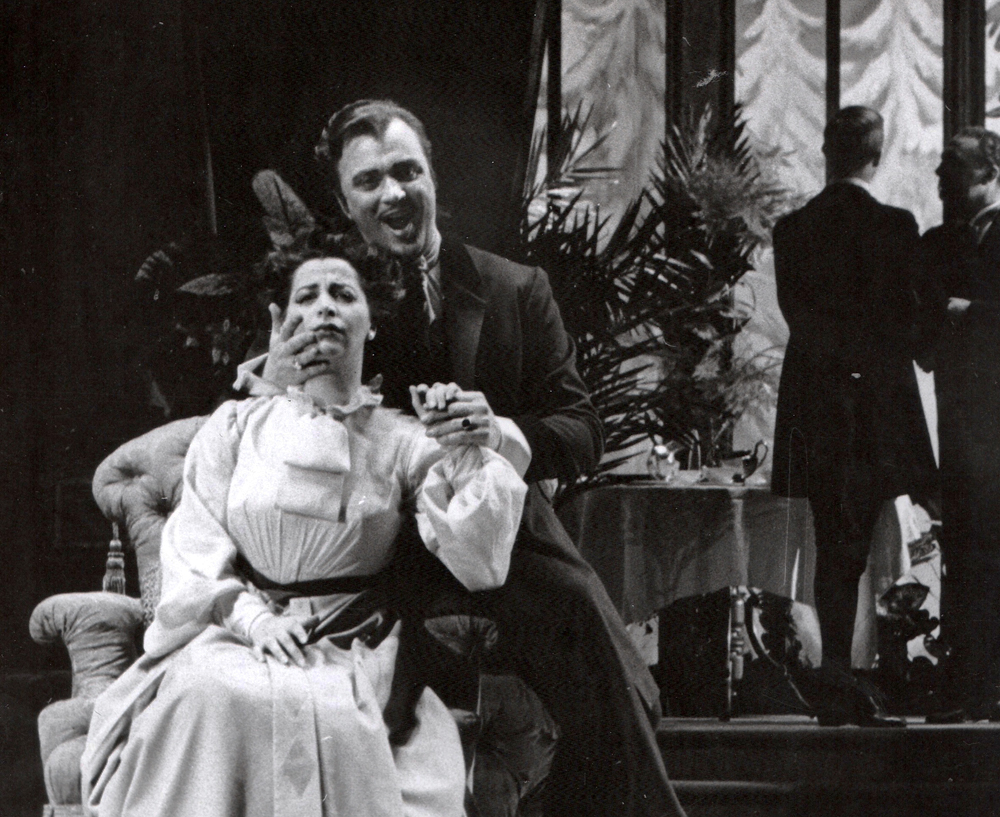 What emerged, however, was a story that caught Barber’s imagination (‘I lost myself completely in the life of Gian Carlo’s characters’), a tantalising idea that saw him pestering Menotti for a completed libretto. It was original plot, but one whose brooding atmosphere and European setting took its inspiration from Danish author Isaak Dinesen’s Seven Gothic Tales.

A woman long-abandoned by her lover waits for his return, shutting herself away for 20 years with only her mother and niece for company. The unexpected arrival of his handsome young son triggers a sequence of tragic events, stirring up emotions for all three generations of women. 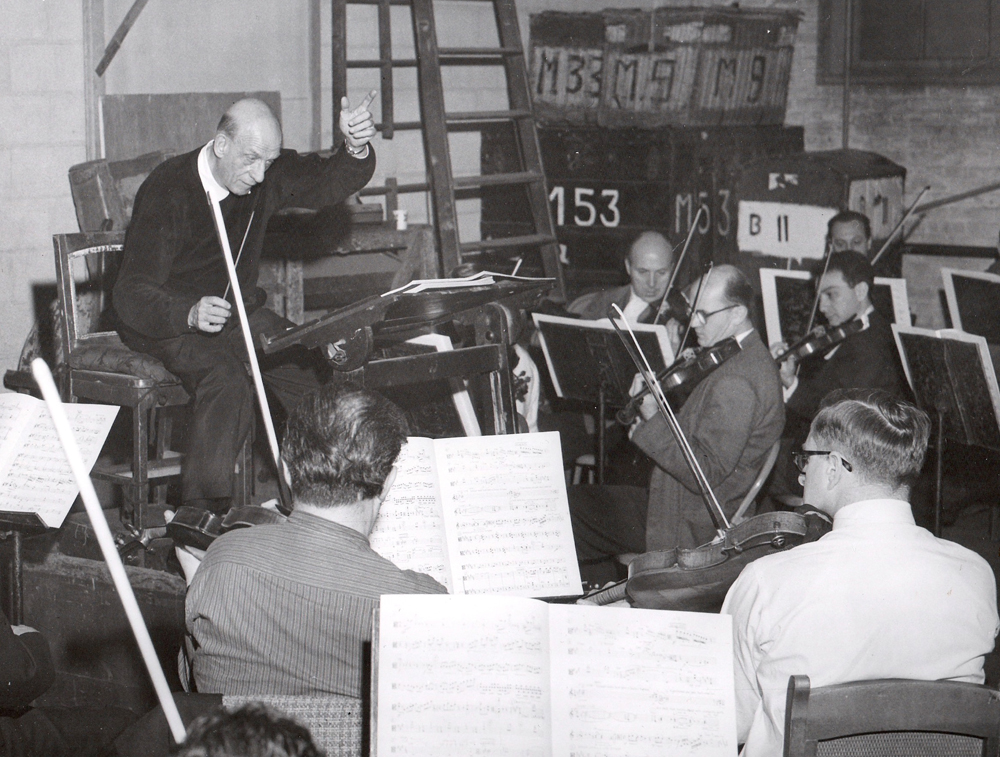 Conductor Dimitri Mitropoulos in rehearsals with the orchestra. Photo: Courtesy of the Metropolitan Opera Archives

It was Glyndebourne’s own Rudolf Bing – the company’s General Manager from 1935-49 and now the General Manager of the Met – together with two other colleagues who first heard the completed draft of the score. Plans were immediately set in motion for a production, and it was Bing who, with Barber, began to tackle the knotty question of casting for such a high-profile new work – the first American work premiered by the Met in over a decade. It was a process that was to prove more turbulent than anticipated, including the loss of lead soprano Sena Jurinac six weeks before the premiere, and a refusal from Maria Callas to tackle the title role. The official reason given was the new challenge of singing in English, but unofficially Barber suspected that it may have had more to do with the role of Erika, Vanessa’s niece, whose more sympathetic character certainly made her a rival for the role of the opera’s true heroine.

The opera that the Metropolitan audience heard and saw in January 1958 was an unashamed homage to an earlier age of opera. Cecil Beaton’s sumptuous designs were an Edwardian fantasy of Gibson Girl outfits and sweeping, country-house glamour, and musically things were no less nostalgic. Strauss, Puccini and even Verdi run through the veins of Vanessa – an opera whose formal structure, musical set-pieces and lush, late-Romantic harmonies make no concession to the avant-garde fashions of the era. When the work travelled to the Salzburg Festival later that year it faced a backlash from European critics. In thrall to Boulez and Berio, to the new experimental textures and techniques of the time, they dismissed the opera as a piece of musical nostalgia – ‘An opera for the public and not for intellectuals’.

But, sixty years on, such a comment seems, if anything, more recommendation than criticism. Barber’s opera, with its glorious melodies and sweeping, surging orchestral writing, speaks directly to the heart in a way that may not have been fashionable in 1958, but which has a timeless power and appeal. The psychological intricacy of Menotti’s plot, with its delicate pen-and-ink portraits of three very unusual women and its mature, complicated heroine, feels strikingly contemporary, tackling taboos that still disquiet us today. The combination is a potent and a thrilling one.

Its music may have harked back to an earlier age, but Samuel Barber’s Vanessa was an opera ahead of its time, a work finally coming into its own today, on the eve of its 60th anniversary. Directed by Keith Warner – whose friendship with Menotti has led to a career-long fascination with the opera, as well as a unique insight into it – Glyndebourne’s new production remains true to the spirit of the original staging. But it will also be faithful to the creators’ original intent, confronting and developing ideas and themes too taboo for a 1950s audience to contemplate. Only now, free from moral censorship, can Vanessa really speak as Barber and Menotti intended.

Catch up on the latest news from Glyndebourne, discover more…
Explore our operas

Emma Bell on Vanessa: ‘Everything I have ever sung of Barber’s I have loved’

Katie Derham explores Samuel Barber's Pulitzer Prize-winning…
Glyndebourne Shop
Our online shop offers a great selection of exclusive and locally sourced products. Every purchase supports our work.
Shop now
Become a Member
Enjoy priority booking for the Festival. Find out how you can join as an Associate Member
Join today
Support us
Glyndebourne is a charity and the Festival receives no public subsidy. We rely on generous supporters who are passionate about opera.
Find out more