Introducing... The Marriage of Figaro

Everything you need to know about Mozart's The Marriage of Figaro, which launches Glyndebourne Open House on Sunday 24 May.

From SUnday 24 May at 5.00pm uk time you can watch the Marriage of Figaro on YouTube for free.

In this instalment of our Introducing series we explore Michael Grandage’s much loved production.

The Marriage of Figaro (1786) was a turning point for the 30-year-old Mozart’s operatic status. It caused a sensation at its Prague staging – the young composer reaching full and startling musical maturity. It was also his first collaboration with librettist Lorenzo da Ponte, with whom he would go on to create Don Giovanni and Così fan tutte. It was a relationship that caught both author and composer at their peak, each challenging the other, pushing both to greater invention and originality than ever before.

The young Mozart was keen to work with the older, more established Da Ponte, and it was his bold plan to adapt French dramatist Pierre Beaumarchais’s scandalous 1778 play about an unfaithful Count determined to seduce his valet’s pretty fiancée that finally sealed the deal. In Da Ponte’s hands the play’s revolutionary ideas were softened and people, not politics, became the focus of a work that delicately unpicks the power structures and currents of emotions between masters and servants in the Almaviva estate outside Seville.

Courtly delicacy and melodic beauty are just the top layer of an extraordinarily rich score, which is at once a charming musical comedy of manners – gossamer-light and infinitely decorative – and a deeper, darker portrait of true human passions. Mozart finds real pathos in the romantic tangles of Cherubino and the Countess, who both long for a love they cannot have. Figaro too, though quick-witted and comic, has a seam of ferocity, cruelty even, which just occasionally curdles the sweetness of this domestic intrigue. This is comedy poised on a musical knife-edge. 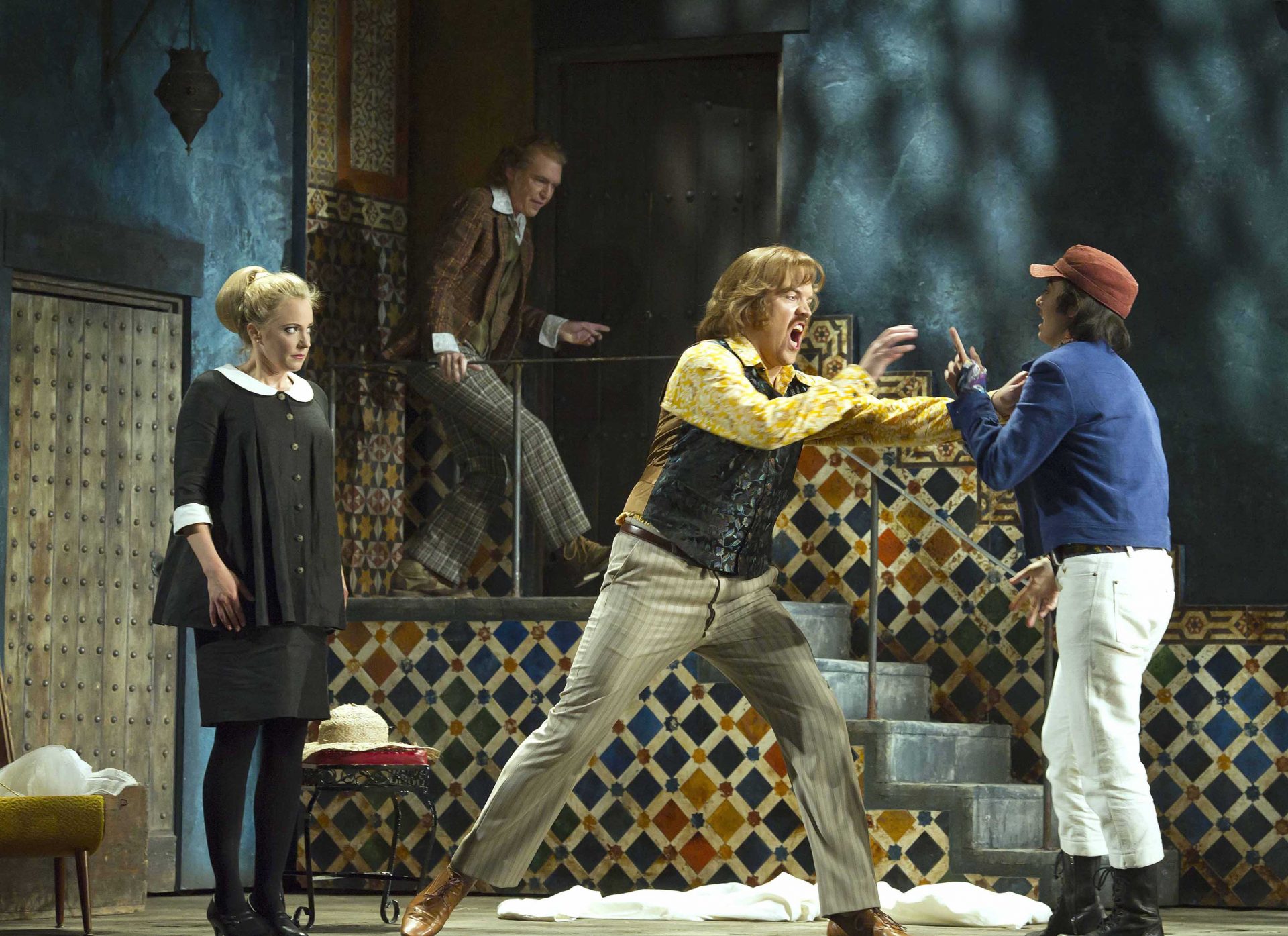 Praised by The Telegraph as, ‘A Figaro of rare grace, naturalness and charm’, this ‘keenly observed’ 2012 production is the latest in a long line of memorable Glyndebourne stagings of Mozart’s opera, stretching back to the Festival’s first ever season in 1934.

Celebrated British director Michael Grandage updates the action from the 18th century to the 20th and the dying days of Spain’s Franco regime. Christopher Oram’s ‘handsome designs’ and ‘sumptuous’ sets place us firmly in the 1960s – a fantasy of sleek sports cars, short skirts, Pucci prints and Alhambra-inspired interiors.

Grandage mines this cusp of a historical moment for all its political and social potential, exploring a period of radical change and class conflict with many echoes of Beaumarchais’s original setting.

Anchoring the knock-about comedy and quick-fire farce of Figaro is some of Mozart’s most emotive and heartfelt music, and no moment is more heartbreakingly raw than the Countess’s Act III aria ‘Dove Sono’, performed in this production by soprano Sally Matthews.

Looking back on the tenderness and affection of her early married life, the Countess wonders where all the love went, and despairs of ever regaining that happiness. A stormy, minor key might have been the obvious choice to express the sorrow of this scorned wife, but Mozart instead chooses sunny C major – a key whose simplicity and innocent optimism cuts cruelly against the speaker’s doubts, giving a sense of smiling through tears. A solo oboe offers a plangent echo and support to the Countess’s long vocal lines, whose serene surface and melodic dignity conceals a tempest of unspoken emotion.

Upstairs among the aristocracy (or, at any rate, the nouveau riche) and their hangers-on, Sally Matthews’ ‘outstanding’ and ‘perfectly poised’ Countess grieves over her unfaithful husband Almaviva (Auden Iverson), while Marcellina (Ann Murray) and Dr Bartolo scheme.

Watch The Marriage of Figaro for free on our YouTube channel from Sunday 24 May where it will be available for 7 days.
Find out more

This October, Big Sky Cinema will be showing Così fan tutte …
Glyndebourne Shop
Our online shop offers a great selection of exclusive and locally sourced products. Every purchase supports our work.
Shop now
Become a Member
Enjoy priority booking for the Festival. Find out how you can join as an Associate Member
Join today
Support a 2021 production
Light the way for the return of our Festival season and support a 2021 production.
Find out more