From Sunday 5 July at 5.00pm you can watch Strauss’s Der Rosenkavalier for free on YouTube. The opera will be available until 5.00pm on Sunday 12 July.

Love can stop hearts and wars, but not time.

The Marschallin adores her young lover Octavian. But she knows that their affair cannot last. So when Octavian meets the beautiful Sophie, she must find a way to let him go. Can she keep Sophie from the clutches of the boorish Baron Ochs and ensure that young love is triumphant?

One of opera’s great romantic comedies, Der Rosenkavalier is a musical fantasy that tempers sweetness with satirical wit, farce with philosophy, humour with pathos. Carried along on the lilting rhythms of the waltz, the voluptuous score paints a gilded vision of a fairytale Vienna. Romance is woven through every bar of a lyrical masterpiece that celebrates a world on the brink of change.

Der Rosenkavalier was captured live at Festival 2014. It is available on DVD from our shop. 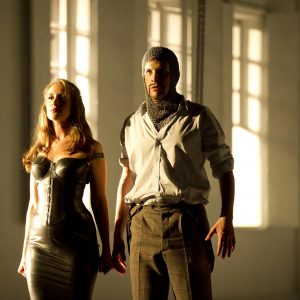 The Marschallin and her young lover Octavian have spent the night together. The Marschallin’s servant Mohammed arrives with breakfast and Octavian hides. When loud voices are heard just outside the room, the Marschallin believes that her husband has returned unexpectedly and Octavian hides again. He reappears disguised as a chambermaid, ‘Mariandel’, just before the sudden arrival of Baron Ochs, the Marschallin’s cousin, who has come to discuss his engagement to young Sophie von Faninal, daughter of a wealthy merchant who has been recently elevated to the nobility. Ochs asks the Marschallin to recommend a young man to deliver the traditional silver engagement rose to Sophie. She suggests Octavian, showing Ochs his picture, and Ochs, noticing his resemblance to ‘Mariandel’, assumes she is Octavian’s illegitimate sister. Ochs propositions ‘Mariandel’, who evades him and flees as soon as possible.

The Marschallin holds her morning levee. An Italian tenor sings to her while Ochs works on his marriage contract with the Marschallin’s notary. An Italian scandal-monger, Valzacchi, tries to sell the Marschallin the latest scandal sheets. Interrupting the tenor’s song, Ochs commands the notary to demand a dowry from Sophie’s family. Valzacchi and his niece Annina offer their services to Ochs.

After her visitors leave, the Marschallin recalls her own early marriage and muses on her fleeting youth and the inconstancy of men. Octavian returns in his own clothing, and she tells him that one day he will leave her, which he resists. She sends Octavian away but then realises that she has forgotten to kiss him goodbye. She sends servants after him, but he is already gone. The Marschallin summons Mohammed to take the silver rose to Octavian to deliver to Sophie.

Faninal and his daughter Sophie await the arrival of the rose bearer. As her duenna Marianne reports on the approach of Octavian, Sophie worries over her impending marriage to a man she has never met, Octavian arrives and presents the silver rose to Sophie, and the two youngsters become infatuated.

After a conversation chaperoned by Marianne, Sophie and Octavian are joined by Ochs and Faninal. Though they have never officially met, Ochs is overly familiar with Octavian and goes on to inspect Sophie like property. Ochs’s followers chase Faninal’s staff, causing an uproar. Octavian promises to help Sophie, and the two embrace. They are discovered by Valzacchi and Annina, who report it to Ochs, who is merely amused, considering Octavian no threat. Octavian challenges Ochs to a duel. In the fight, Ochs is slightly wounded but cries bloody murder. Sophie tells her father she will never marry Ochs. But Faninal insists, threatening to send Sophie to a convent, and ejects Octavian. Ochs, left alone, is cheering himself with a drink when Annina arrives bearing a letter for Ochs from ‘Mariandel’ requesting a rendezvous.

Valzacchi and Annina have transferred their allegiance to Octavian and help him prepare a trap for Baron Ochs at the site of his imminent meeting with ‘Mariandel’. Ochs arrives and attempts to seduce the chambermaid, but is unnerved by her resemblance to Octavian. The antics of Octavian’s accomplices make Ochs think he is hallucinating. Then Annina, in disguise, enters with a gaggle of children, claiming that Ochs is her husband and the children’s’ father. The police arrive and, to avoid a scandal, Ochs claims that ‘Mariandel’ is his fiancée Sophie. Octavian secretly lets the Police Inspector in on the plot. Faninal arrives, irate to be embroiled in such a scandal, and he sends for the real Sophie. When the Marschallin enters, the Police Inspector recognises her, having once served as her husband’s orderly. Octavian emerges, in his own clothes, and the Marschallin sends the police and all the others away. Ochs finally comprehends the truth about the Marschallin and Octavian/Mariandel. He tries to maintain his engagement to Sophie, but the Marschallin insists that he leave Vienna gracefully. Ochs departs, pursued by creditors.