Discover how our work has had an impact on individual lives and communities, and how, for some, a lifelong connection with opera and the arts has been kickstarted through Glyndebourne’s education programme.

Below you can read about some of our key projects, and the impact they had in 2018. 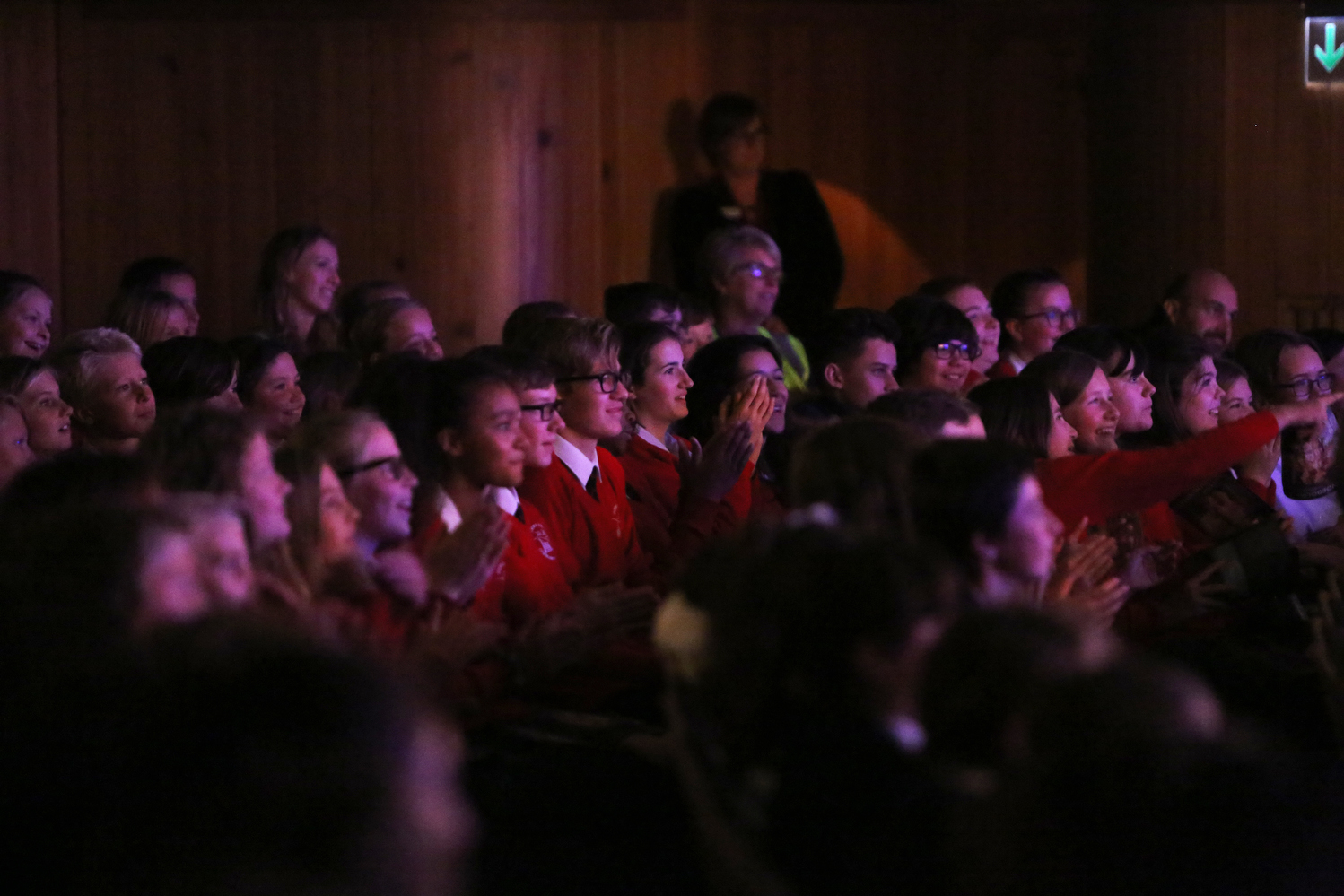 Since 2006, our Performances for Schools programme has provided unique opportunities for schools across England to introduce children and young people to the emotion, spectacle and intensity of live full-length and fully staged opera at affordable prices. The Glyndebourne Tour remains the only touring company in the UK to offer fully-staged world class performances dedicated to schools and other education providers.

‘It was the most incredible day for us all. Completely surpassed expectations in every respect. We cannot begin to thank you enough for providing our children with such an incredible experience. I came many times as a child, as my mum was a violinist in the orchestra. It was wonderful to see our children gaining the same experience’ – Music teacher following the performance of Così fan tutte at Glyndebourne 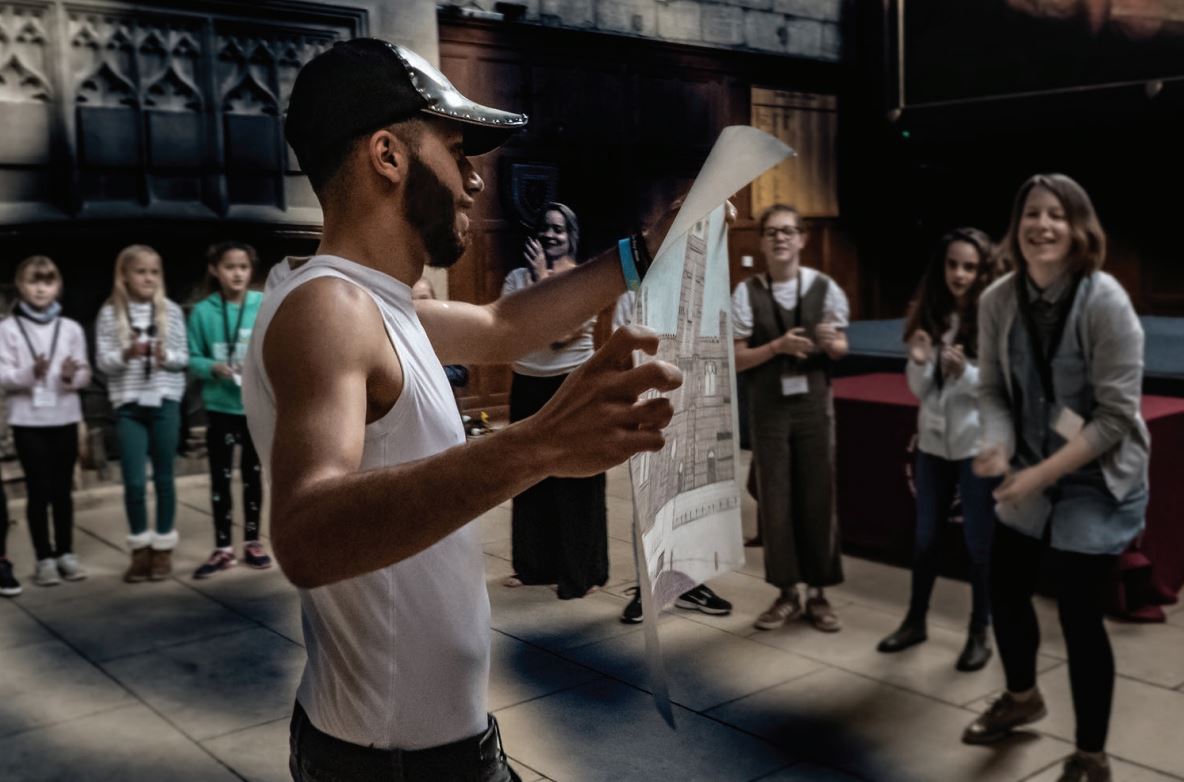 In August 2018, our GYO participants took over the town of Battle along with young people from Eritrea, Syria, Iraq, Italy and the UK and artists from Italy and the UK for ten days as part of The Giufà Project – a collaboration with partners including Opera Circus, Crisis Classroom and Battle Festival on the theme of migration. GYO performance projects continue to provide young people with the highlight of their year, with our main stage youth opera Belongings in 2017 surpassing or meeting expectations of 97% of participants.

GYO will perform alongside the Glyndebourne Chorus in two Christmas concerts at Glyndebourne on 8 and 9 December to help celebrate 50 years of the Tour.

‘An incredible musical experience that I could never forget’ – Belongings participant

Find out more about the Giufa Project

Participants will receive specialist training in disciplines including voice, language, music, drama and movement. They will also have the opportunity to attend rehearsals and to meet singers involved in Glyndebourne Tour and Festival productions and to gain an insight into the world of professional opera singers. Four of these singers will appear in the world premiere of our 2019 community opera, Agreed.

The programme will be open annually to young singers in our local area aged between 14 and 19. Singers will either be considering studying music beyond school, interested in pursuing a career in singing, or in developing their singing potential. Mary King will lead the programme with input from a broad range of opera professionals. 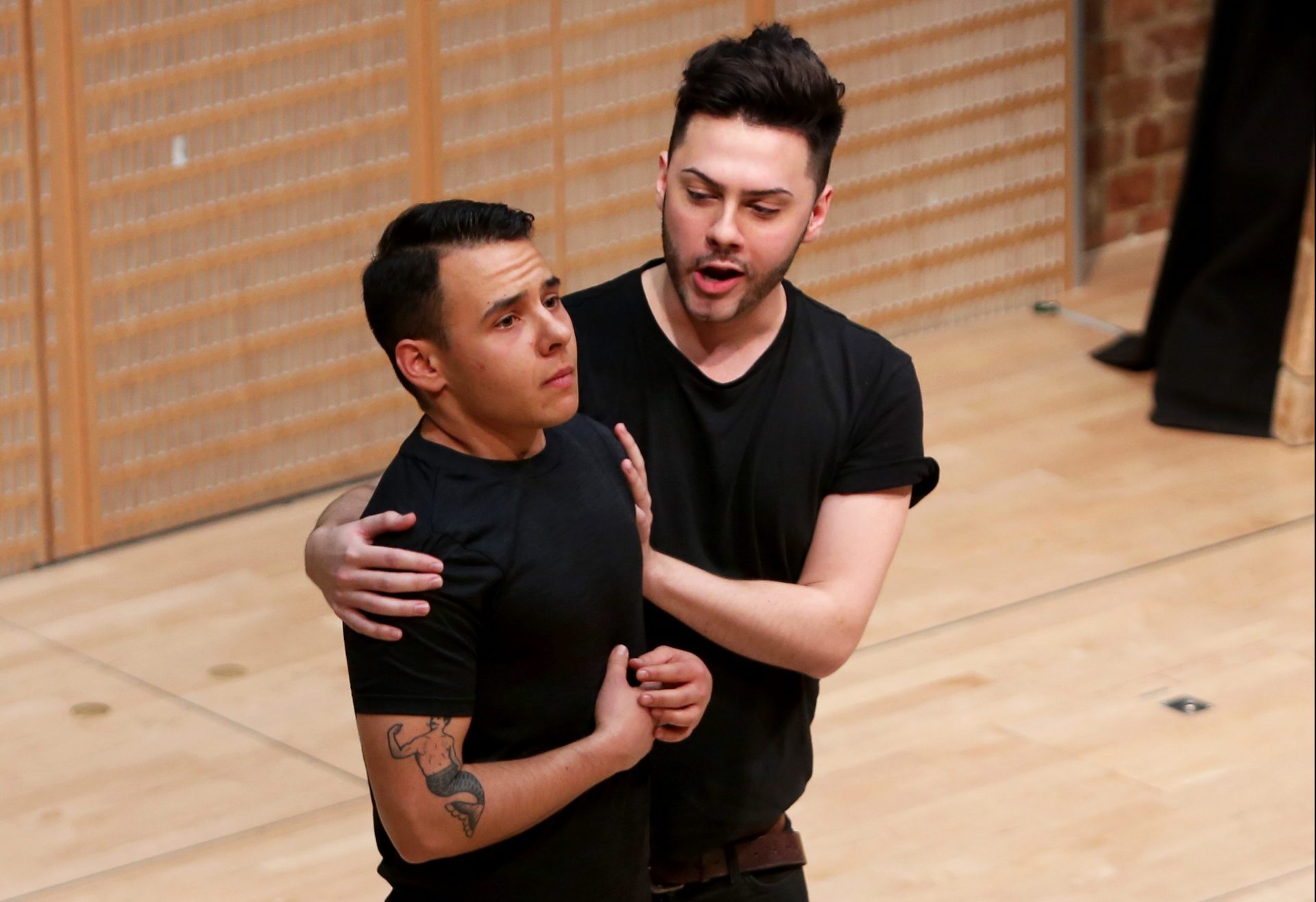 Our Academy facilitates the discovery and development of talented singers aged 16-26 who haven’t necessarily followed traditional training routes and face barriers to pursuing this career. Participants are offered training, mentorship, advice and guidance. The 9 singers on the 2017 programme faced a wide range of barriers. These included physical and mental health conditions, social and economic deprivation, geographical isolation, a lack of access to musical training earlier in life, and in one notable case the impact of gender transition on a trained singing voice. 100% of participants agreed or strongly agreed the programme improved their singing technique as well as performing, language and physical skills.

‘Glyndebourne was creating a safe space for singers to accept their flaws or inadequacies, and to work on them without judgement, and to give them a real chance to make up for lost time due to finances, illness, disability – or in my case, the two years lost while taking testosterone. From the very first audition, I felt supported and loved… After leaving the Academy, I felt a renewed sense of ambition and a sense of hope in my career that I hadn’t felt in a very long time. I now have the confidence to know that I’m on the right path, and that I have mentors to support that’ –  Holden Madagame, Academy participant 2017

We are seeing longer-term impact through the progression of previous participants. Joe Hookway is studying at the Royal Conservatoire of Scotland, Katie MacDonald, Will Rennie and Zac West are studying at the Guildhall School of Music & Drama and Kiefer Jones has recently debuted with Opera Cymru. Ryan Williams is also currently studying at the Royal Academy of Music, Emilie Parry-Williams is at Royal Welsh College of Music & Drama and Hannah Boxall is at The Royal Northern College of Music. Darwin Prakash has completed the postgraduate opera course at the Royal Academy of Music and has secured a place in the Glyndebourne Chorus where he will appear in La damnation de Faust and Il barbiere di Siviglia in the Festival 2019. 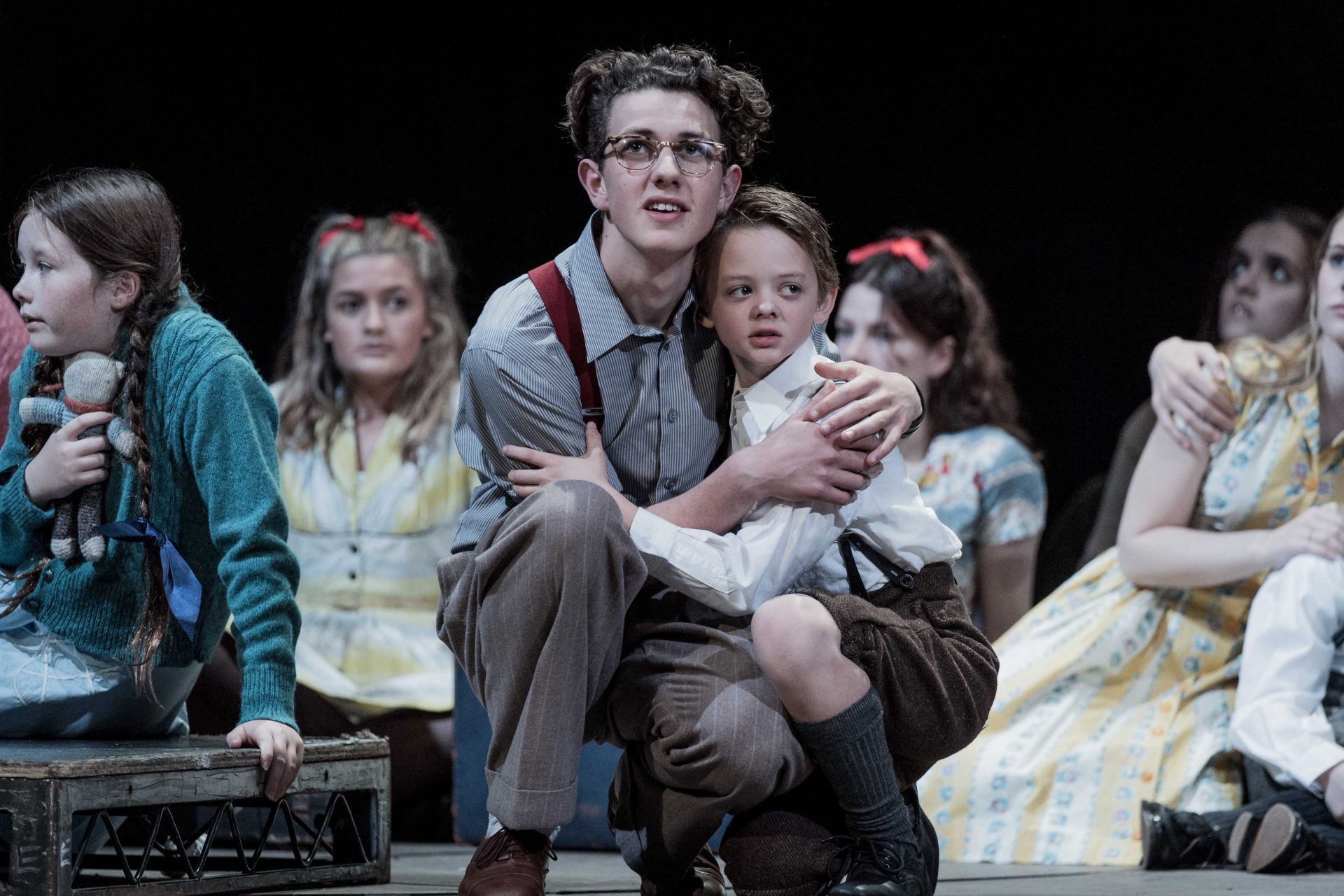 Belongings, a youth opera composed by Lewis Murphy (Young Composer-in-Residence 2015-17), was the latest education commission to be performed on the main stage. The work explored the experiences of two groups of young people forced by war to flee their homes – World War II evacuees and present day refugees. Belongings featured 65 chorus participants aged 9-19 from 34 different schools and colleges, 7 musicians from the London Philharmonic Orchestra’s Foyle Future Firsts orchestral development scheme and 3 professional singers. There were two performances of Belongings on the main stage at Glyndebourne in November 2017, including a matinee performance for schools. Both performances were sold out with over 2,200 people attending.

We are delighted that Belongings has been shortlisted for a 2018 YAM Award in the Best Opera category. The YAM awards celebrate excellence in the field of live music experiences by identifying and promoting the best musical productions for young audiences from all around the world.

Brighton Festival and Glyndebourne are bringing together an intergenerational chorus of women and children to perform the world premiere of a new choral work about motherhood-childhood called Eye to Eye at Brighton Festival in May 2019 conducted by Sian Edwards. Auditions took place on Sunday 30 September and a chorus of 80 have been selected to take part.

The Giufà Project – a collaboration between artists, young people and creative organisations across Europe to explore the theme of migration – involved a summer residency with 14 participants from across Europe coming together with 32 local young people to create and share art. Participants will return to Battle on Saturday 20 October for a performance as part of the Battle Festival.

We are creating a new community opera for spring 2019, entitled Agreed, which will be performed four times on our main stage, including one schools performance. Earlier this year we auditioned 180 local people for this new work (the biggest response to an open audition we have had for a community opera), and 81 have been offered chorus places. The piece has been composed by Howard Moody and directed by Simon Iorio. For the first time, we will collaborate with the Orchestra of the Age of Enlightenment (OAE) for a main stage community opera. The theme of Agreed is around divisions in society caused by fear. The story of Agreed will build on the legacy of a combination of commissions from our education department over the last three years, which have all explored global themes of migration, displacement and divisions in society.

‘‘It was mesmerising, thought-provoking and very moving. I cried and I know I was not alone. A fantastic production that needs to be done to a wider audience. It was a triumph!’ Audience member

Our education programme is devised and delivered with many partners. Through working together we can provide opportunities for, with and by many more people in our local region, and support regional strategies for cultural education. Most recently, in partnership with our two local music hubs we have delivered the East Sussex Choral Summer School, East Sussex Big Sing and the Songs to Share teacher training programme.

16 children participated in the choral summer school led by Travis Baker and Mary King in July, which culminated in a performance at Lewes Town Hall. In 2017, the East Sussex Big Sing reached over 2,000 primary school pupils from c.60 schools through 12 concerts in 4 locations. Glyndebourne supported the Big Sing by assisting with programming, hosting the launch event and creating online resources. Lewis Murphy also wrote two carols as part of his Glyndebourne residency remit. This December we will host two Big Sing concerts on our main stage.

The Songs to Share programme continues to deliver specialist training for teachers and other professionals who use music in their practice. 3 sessions for 48 education professionals have been delivered so far this year. 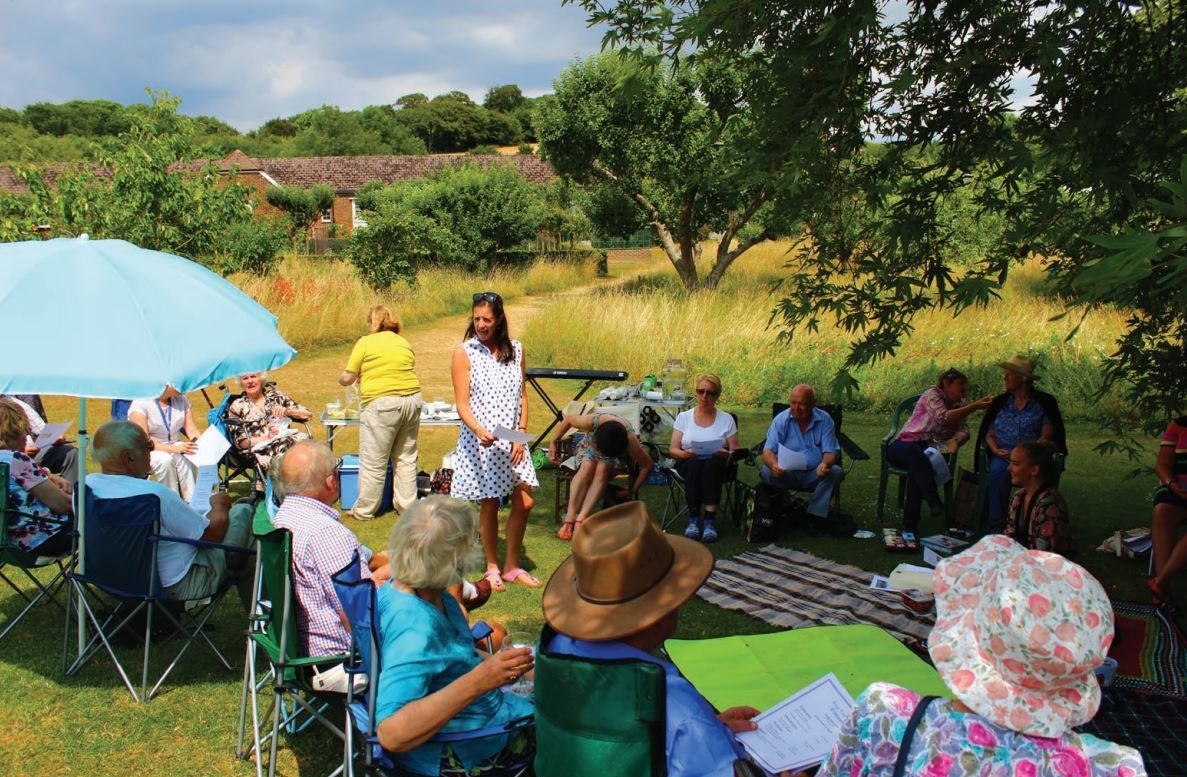 2018 marks the 10th anniversary of Raise Your Voice – an opera project for local people living with dementia and their carers. Sessions are a welcoming and friendly place for beneficiaries to be creative and enjoy spending time together as part of a bigger group.

During the sessions participants work with professional musicians to explore an opera from the Glyndebourne repertoire, using music, drama, dance, and craft activities to create their own response to the opera.

We are currently working with 22 participants who attend throughout the year. The project is taking inspiration from Giulio Cesare. 20 sessions are delivered each year, including a picnic event that took place at Glyndebourne in July.

Donate to our education work

Contribute to our award-winning education department’s year-…
Glyndebourne Shop
A beautiful array of gifts for her, for him, for children and for the house and garden. Every purchase supports our work
Shop now
Become a Member
Enjoy priority booking for the Festival. Find out how you can join as an Associate Member
Join today
Leave a lasting legacy
Help ensure Glyndebourne's future for generations to come
Find out more