Sweet-natured Cendrillon lives the life of a servant with her cruel stepmother, stepsisters and her downtrodden father Pandolfe.

Transformed for just one night, she captures the Prince’s heart at the royal ball. Will she find a way to escape domestic drudgery and reclaim her beloved? With a little help from her Fairy Godmother, she just might.

With its combination of enchanting love story and broad, burlesque comedy, Cendrillon is one of the great operatic fairy tales – a Cinderella that looks back to Charles Perrault’s original story in all its richness and ambiguity. Massenet’s sensuous Belle Epoque fairy tale is gilded with lavish orchestral textures and glittering vocal writing, drawing on everything from baroque dances to Wagner-inspired chromaticism to bring its story to colourful life, conjuring a world of infinite musical and emotional variety. 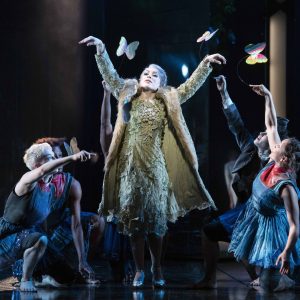 What you thought of: Cendrillon (Cinderella) 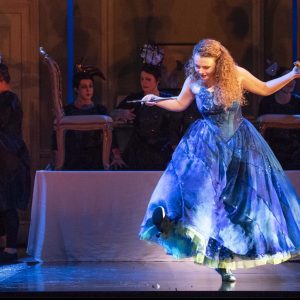 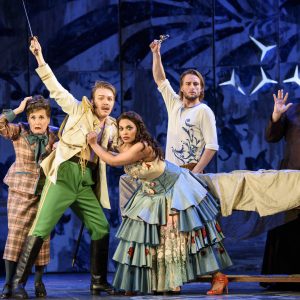 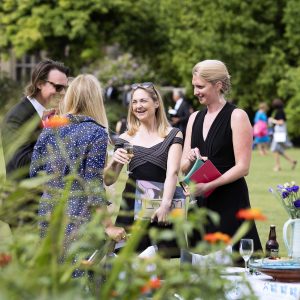 A guide to Glyndebourne Festival 2019 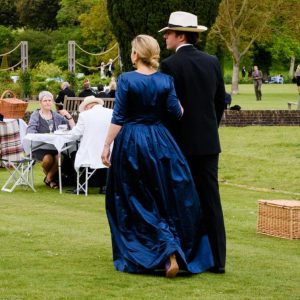 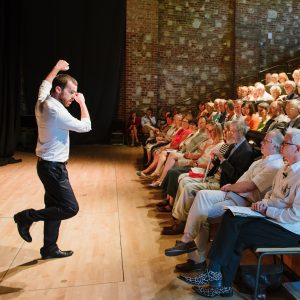 Original production conceived and directed for the Tour by
Fiona Shaw

Revived and directed for the Festival by
Fiona Dunn

The Master of Ceremonies
Romanas Kudriašovas

Sweet-natured Lucette (nicknamed Cendrillon) lives the life of a servant with her downtrodden father Pandolfe, her cruel stepmother Madame de la Haltière and her two stepsisters Noémie and Dorothée.

Faced with an ill-natured wife, demanding stepdaughters and unhappy servants, Pandolfe regrets the simplicity of his former days living alone with his daughter Cendrillon in the countryside. He resolves to assert his authority and spare Cendrillon from the bullying of her new relations. Meanwhile Cendrillon’s stepmother and sisters prepare to go to the ball, where they hope to attract the Prince.

Cendrillon herself is to be left at home. But as Cendrillon sleeps by the fire, her Fairy Godmother appears, conjuring a magical gown from starlight and moonbeams as well as glass slippers that will disguise Cendrillon from her relatives. But the enchantment will break at midnight, so Cendrillon must return home before then.

The Prince is melancholy. His father the King reminds him that he must choose a wife. Eligible princesses present themselves to him in a sequence of dances, but none of them catches his eye. A beautiful stranger – Cendrillon, disguised by the Fairy Godmother’s magic glass slippers – arrives, and she and the Prince fall instantly in love. The clock begins to strike midnight and Cendrillon flees, dropping her glass slipper as she goes.

The family returns from the ball, angrily discussing the beautiful stranger. Ultimately, they dismiss her as a passing fancy; the Prince couldn’t possibly love such a woman. Cendrillon nearly faints with horror. Comforting her, Pandolfe promises to take her away with him to live in his country home. But Cendrillon cannot be comforted, and runs out into the cold night to die, refusing to be a burden to her father.

Her Fairy Godmother conjures spirits and a magical bower, bringing Cendrillon and the Prince, who has also been drawn to the forest in search of his beloved, together at a magic oak tree for a mystical ceremony of love. They exchange their vows, embrace, then fall asleep by a stream.

Months have passed since Pandolfe found his daughter near death by the stream. Delirious, she half wakes, telling her father all that has passed. But he tells her it was only a dream. It is now spring, and at the palace the Prince summons all the women of the kingdom to try on the glass slipper, in hope of finding his beloved.

Convinced that one of her daughters must be the Prince’s true love, Madame de la Haltière hurries them off to the palace. Now recovered, Cendrillon resolves to go with them. She tries on the slipper and the Prince recognises his mysterious beauty from the ball. The two lovers are reunited and the whole court rejoices.

And a syndicate in memory of Maria and Marina

And The Glass Slipper Circle

Everything you need to know for your visit to Glyndebourne.
Events

Opera’s greatest comedy makes a welcome return to the Glynde…
Glyndebourne Shop
A beautiful array of gifts for her, for him, for children and for the house and garden. Every purchase supports our work
Shop now
Dialogues des Carmélites
Join us for Poulenc's extraordinary 20th-century tragedy
Find out more
Become a Member
Enjoy priority booking for the Festival. Find out how you can join as an Associate Member
Join today